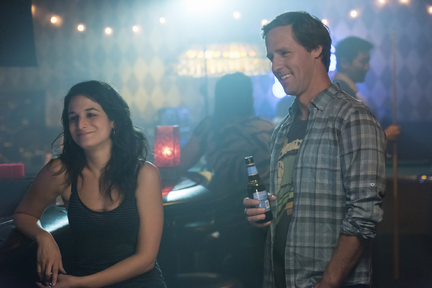 The Russ/Jess friendship on FX’s Married has often been painful to watch. I can see why these two worked once upon a time. They probably had so much fun together when they were younger. So much fun that I’ve often wondered if these two ever did the friends with benefit thing. (I’m pretty sure Russ has admitted nothing’s ever happened between the two). However, ever since we were introduced to these characters last season, things have always seemed a little off. Like there’s this disconnect. So what happens in “Guardians” feels inevitable.

The disconnect turns into this great big divide. They don’t have anything in common anymore. Season 2!Russ is more responsible. More mature. He has a family he’s helping support with his new job. Which means he’s busier and doesn’t have time to hang or deal with any unnecessary baggage. Meanwhile, it feels like Jess is regressing. It’s like she’s going through some sort of crisis. She’s getting older but doesn’t want to let go of her youth.

Jess clearly isn’t comfortable with her life. She’s someone who doesn’t want to quit the late nights at the club and the drugs and the wanting to feel relevant with men who are more age appropriate for her. She’s someone who’s feeling trapped and when she feels trapped she takes it out on everyone around her. Poor Shep has to take the brunt of it. We see what happens to their marriage. They are done.

While I’m happy that Shep has extricated himself from this miserable union, it’s hardÂ to see Russ and Jess drift so far apart. It’s almost like you can physically see Jess fading from Russ’ existence before our very eyes. It’s difficult to see Jess try and hang on for a little bit there. When she suggests to Russ that he entrust her with his kids if anything happens — and he can’t come up with anything to say — it shows me that he’s done with her, that all he needs to do is cut the cord. And it shows me that she’s a bit delusional in thinking that he and Lina could ever agree to giving her the kids. She can’t even be bothered to make sure her stepson is happy. She’s too selfish to even let him bring his drums to his dad’s house.

By the end of the episode, what’s left standing? It’s not Russ and Jess. That’s done and gone, pretty much. What ends up happening is Russ and Shep’s friendship is solidified when Russ asks him to be the guardian of their kids. I didn’t really see that coming.

But something Andrew Gurland said in our “Guardians” preview is telling. In real life, he’s had to make these tough decisions. He’s at a point in his life where his family and work come first. Then comes friendship on the list of priorities. And he can only have friends who don’t distract him from family and work. That’s what’s going on here. Russ has to come to the realization that Jess sucks up too much of his energy with her drama. He doesn’t have time for that. He’s all about his wife, kids and work. And he’s not going to let anything get in the way.

I’m not sure there’s going to be closure between Russ and Jess. I’m not sure if there should be closure. It’s so difficult to actually admit to yourself that a friendship isn’t working for you anymore. And then it’s even harder to actually put an end to it. Sometimes it’s easier to simplyÂ let things fade away on its own without any interference or calling attention to it.

I’m kind of in awe at how Married tackled the end of the Russ/Jess friendship. It’s been a slow burn but now it feels like they’re done. The show made it so realistically painful and heartbreaking that I felt this loss. I wonder if we’re even going to see Jenny Slate again before the end of the second season. There’s only a few episodes left.

Once Upon a Time “Sympathy for De Vil”