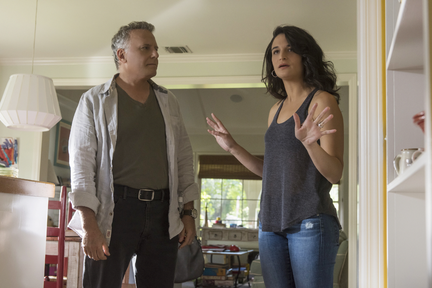 FX’s Married tackles some realistic relationshipÂ strugglesÂ in tonight’s episode. Russ and Lina deal with the future and fadingÂ friendships. Abby has to figure out how to navigate AJ’s special brand of issues and idiosyncrasies.

Russ (Nat Faxon) and Lina (Judy Greer) try to figure out who gets the kids if they die.

The episode also lays bare the complications of a May/December marriage through the eyes of Jess (Jenny Slate) and Shep (Paul Reiser).

Russ and Lina and Shep and Jess

When we hit the set of Married earlier this year, creator Andrew GurlandÂ mentionedÂ “one of the issues that we’re dealing with [in Season 2] is adult friendship.” Russ’ closest palsÂ are the troubled AJ and the even more troubled Jess. As we all know, they are both damaged individuals that come with a boatload of baggage.

According to star Nat Faxon, “Russ is always sort of the caretaker of his friends in a way.” In “Guardians,” it’s clear that the connection between Russ and Jess isÂ dissipating. “They are slowly growing apart because I think Jess’ antics and behavior seem to be more and more unflattering to Russ and probably less fun than they used to be when they were younger,” he explained. “I think Russ is slightly more responsible and slightly more considerate and I think Jess is probably in a crossroads in her own life of being stuck. And I think Russ is beyond that.”

This topic of flailing friendships is something Gurland can relate to. “How do you maintain friendships when those are more taxing than your work or family obligations,” he asked. “I know that for so many years, friends were the most important part of my life. And now that I have a career and I have three children and I have a wife: family, work, friendship. And I can only have friends who don’t distract me from those other two things. And I’ve had to start cutting them.”

In Season 2, AJ is post-rehab, sober, unemployed and celibate. He has a lot on his plate. But that doesn’t stop him from entering in to a relationship with Lina’s quirky coworker, Abby. The two hit it off but in “Guardians,” things sort of hit a snag. What’s to blame? AJ’s inability toÂ let things happen organically. He always has to go overboard. Boundaries, AJ. Boundaries.

Brett Gelman feels Abby and AJ are “two very odd people [who] come together and they find each other and they somehow click. They have that rare thing that I think also Russ and Lina have — but in a stranger way — where they’re willing to let it all hang out. And it doesn’t freak the other one out.”

Well, look forÂ Abby to freak out a tiny bit. Probably not as much as she should be freaking out, however. Sarah Burns thinks Abby is “someone who lives in the moment.Â In that her opinions are directly in response to the opinions around her. She’s very easily guided and swayed which is easy for me to play because I’m similar to that.”

Even though Abby can be “easily guided and swayed,” that all goes out the window when it comes to taking care ofÂ her kid. Her son is everything to her and that is all part of the equation in tonight’s episode.

Burns may be new to MarriedÂ this season but she and Gelman aren’t what you call strangers. “Brett Gelman, who plays AJ, is a really good friend of mine. We’ve known each other for years through improv and sketch comedy in New York Upright Citizens Brigade Theatre.”

Abby and AJÂ each respond to whatever life throws themÂ in very strange and interesting ways. It’s what makes them compatible. But does that make them a couple that has staying power? Only time will tell.

You're the Worst: What You Need to Know about Season 2