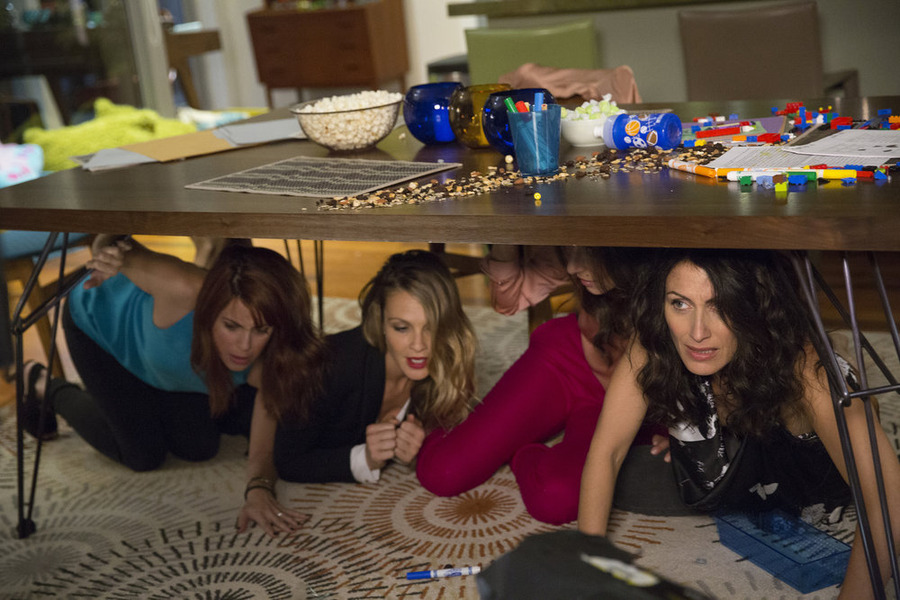 During last week’s Girlfriends’ Guide to Divorce (“Rule #32: F-You Rob Frumpkis”), Abby wrote a feature in the Huffington Post based on her going on ten dates in two days. The experiment was interesting to say the least. The best part of it was the sizzling hotness that ignited betweenÂ Will and Abby.

However, the next morning, the flames were doused big time when Will 1. Asked Abby to read his book about his time climbing Mount Everest. And 2. Asked her to pass the manuscript on to her editor if she liked the book. Ruh roh. Abby said she’s someone who wants to be the “pretty pretty princess.” She doesn’t want to be used as a resource.Â I’m not going to lie. I kind of got where she was coming from. It wasn’t enough to squelch my love for Will and Abby. I was a little disappointed, however.

Meanwhile, Abby and Jo had another massive argument when Abby found her friend having sex on her couch with Doug Franklin (Aaron Douglas, Battlestar Galactica, The Killing, The Bridge, The Returned). Luckily, they were able to clear things up despite being able to devastate each other with their war of words. Abby and JoÂ are two very different women. But they both have something in common: they are hardcoreÂ arguers. I don’t know how they do it.

So taking on that HuffPo assignment was more out of necessity than anything. Thankfully, Abby’s a great writer. She gave the online site the kind of article she wanted to give. And now it’s possibly catapulted her onto a whole new path. That is, if she can stay away from the Mean Girl Fundraising Mom Posse at her kids’ school. Here’s a sneak peek into what’s going on with Abby in tonight’s episode:

-One of the big themes of this episode is fear. Everyone has them. Even Charlie/Chad. Turns out he’s afraid of the dark. Let’s break things down character by character:

Abby: She is a whole mess of fears right now. That has to be a natural part of getting divorce. Something in her recent past haunts her in a very uncomfortable way. Plus, her daughter ending up on the “slut list” certainly riles up some fears as well.

Phoebe: In last week’s episode, she got herself a life coach who urged her to spend more time with her kids; go on a man-cation; and find something that would give her purpose. She found herself spending time with Marco, who owns an urban organic farm business. He’s not impressed by Phoebe and that’s something she kind of needs right now in her life. This week, her fears of regressing into past behaviors is completely warranted. Can she figure out how to work on herself and curb her enthusiasm for all things that have to do with the male persuasion…at least for a little while? I really like Phoebe’s journey. In tonight’s episode, she shows she has a lot of passion. And it is not necessarily for what you think.

Jo: In “Don’t Stand in the Doorway,” she finds out something that’s hurtful and brutal. But you know what? She’s someone who’s going to find out a way to hit back. I really like that about her.

Delia: Last week, Delia finally showed some vulnerability and emotion to her friends. She wasn’t as put together as she normally is. It was a welcome sight. Until now, she’s always seemed a bit of an outsider because she puts up these walls that are hard to break through. I don’t want to say she’s showing a softer side, because that’s just not who she is. But she’s letting those walls down at certain moments. And I like those flashes. Will those moments come more frequently? Or will she throw those walls back up quickly and decisively and be done with it? Delia recently outsmarted Gordon’s soon to be ex, Courtney Beech, the fashion designer. But Courtney got the last laugh when Gordon slept with her to change the separation date. He had no idea Delia had already outmaneuvered Courtney. Needless to say, Delia was pissed. Here’s a sneak peek that shows her mindset right now:

Can Delia get over this betrayal? It seems to play into her fears about relationships. I’m not sure that Gordon’s ultimately the guy for her but if she doesn’t take risks sheÂ mayÂ end up alone.

Jake: What can I say about Jake? Of course he has fears. But I don’t want to tell you guys about how they pertain to this episode. All I’m going to say is that there’s one quick, quiet moment where I really want to know what he’s thinking. I have thoughts but I will just have to share later.

Max/Ford: They’ve brokered an arrangement forÂ anÂ open marriage. You’ll get to see how that deal is holding up.

Finally, there are a few guest stars from previous episodes that make another appearance. And there’s one new one. Susan Walters (love her) is in this episode. Daytime fans know her as Lorna on Loving and Diane on The Young and the Restless. Primetime fans know her as the now deceased Mayor Lockwood on the CW’s The Vampire Diaries. Some of her other TV credits include Seinfeld, Teen Wolf, Reckless, Star-Crossed and the original Melrose Place.

I really hope this show gets a second season. Girlfriends’ Guide to Divorce airs Tuesday nights at 10/9c on Bravo.

Edited To Add: Bravo has renewed itsÂ very first scripted series. Girlfriends’ Guide to Divorce will be back for season two! Such good news, right?

The X-Files Settles In But Doesn’t Settle: “My Struggle” and “Founder’s Mutation”