Our Justified farewell tour of fabulous characters continues this week with the return of a few familiar faces–Limehouse (Mykelti Williamson), Errol (Demetrius Grosse), and Bob (Patton Oswalt). The episode follows Ava as she wigs right the hell out and tries to run, but not very far.

We also follow Boyd as he makes a plea to one of Ava’s kin, a daft and deadly uncle played by Jeff Fahey. It’s an episode chock full of people–and I do mean EVERYONE except Art is along for the ride–so we don’t spend a terribly long amount of time with any one them. Jon Avnet directs his ninth episode (with the tenth to follow next month). 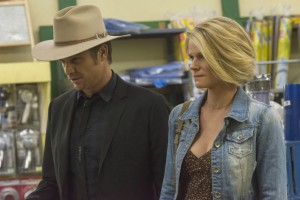