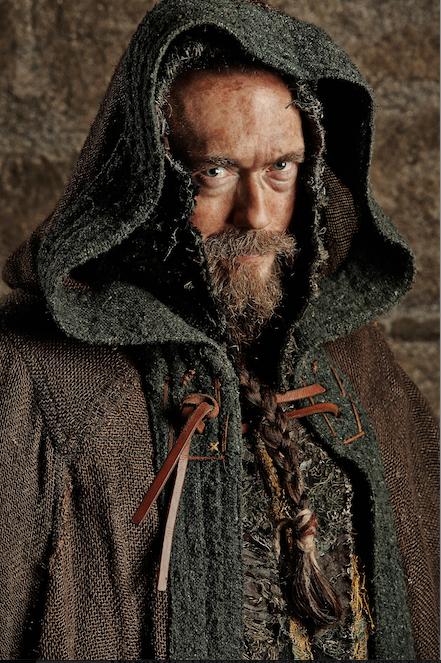 Season Three of HISTORY’s Vikings starts in just a few days. And we’re making it our duty to get you sufficiently prepped.

One of the new characters that makes an impact in the first half of the seasonÂ is Harbard. His scenes primarily take place in Kattegat. Kevin Durand (Dark Angel, Lost, The Strain) is the intense actor that gets to play this very mysterious character.

Kevin Durand: “I’m a big fan of the show. I watched the first season before I first heard that [creator] Michael Hirst was interested in me coming in and playing the character.”

HISTORY’s description of Harbard Â â€“ A wanderer who turns up unexpectedly in Kattagat when Ragnar and most of the men of the town are away raiding. Harbard will have a profound effect on Queen Aslaug, Siggy and Helga, all of whom have had the same dream, presaging his arrival.

TV Goodness recently took part in a press call with Kevin Durand where he talked about taking on Harbard.Â He confessed it was after he binge-watched the second season that Vikings became one of his favorite shows on television. It’s why he’s excited to join the hit series.

Durand: “They started sending me some pages and – I mean – the words were so alluring that were on the page and I thought, wow, this is really interesting. Iâ€™ve never played anyone like this and how great to be a part of this great show.”

5 Things You Need to Know about Harbard

The actor couldn’t reveal a lot about his character on a big-picture level. But he did manage to give us a few hints.

When Durand and Hirst first started talking about Harbard, he learned some interesting things about the man he was going to play.

Durand: We talked a lot about the influence that Rasputin has on this character as well as a couple of other figures that I can’t really mention.

Grigori Rasputin being a mystical faith healer and advisor to Tsar Nicholas II. Durand made sure to do his research on the man who is said to have contributed to the downfall of the Russian monarchy.

Durand: Yes, I read about his life. Heâ€™s such an interesting character and such a walking circus of contradiction. [Laughter] It was really fun to get to play with those extremes with Mr. Harbard here.

Harbard’s interactions are mainly with the women back in Kattegat. But don’t worry. The men will feel the effects of his presence.

Durand: I can guarantee you that all the major characters in this show will definitely feel the impact of Harbardâ€™s actions.

We have a feeling that Harbard’s actions will be more psychologically brutal than physically brutal. Because there’s a mystical aspect to this character.

Durand: Heâ€™s a healer. Where do these powers come from? Why does he seem to have kind of a hold over some of these characters and, as youâ€™ll see in episode four, that mysticism I think plays into why he ends up being so impactful on many of the lives of the main characters.

His favorite Harbard dialogue comes in the very beginning of the character’s Vikings arc.

Durand: The speech that Michael wrote for Harbard when heâ€™s first taken in by Princess Auslag and when I basically kind of tell the them story and kind of enchant them â€“ well, at least I enchant Auslag and Siggyâ€™s still a little bit skeptical of me but that speech that – when I first read that I was so excited to get a chance at saying those beautiful words that Michael wrote.

Vikings season three premieres this Thursday at 10/9c on HISTORY.

Synopsis for â€œMercenaryâ€ (the season premiere): Ragnar and Lagerthaâ€™s fleets depart Kattegat once more for Wessex and this time they bring a group to colonize there. King Ecbert hosts the Norsemen and proposes a deal. Despite the misgivings of some of the other leaders, Ragnar leads his forces into battle once more, but this time as allies of Wessex.