The Dark Charlie Rises, Supernatural “There’s No Place Like Home” 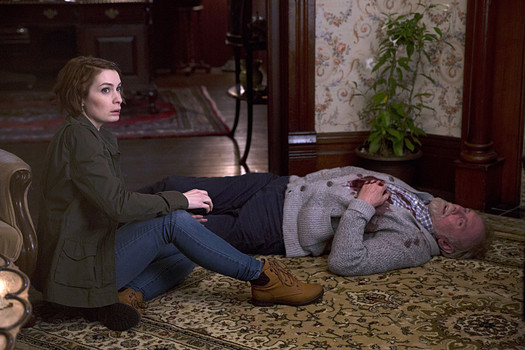 Charlie’s back from Oz. Unfortunately something hitched a ride with her. It’s a side of the hacker we’ve never seen before. In fact, I didn’t realize she was even capable of having that kind of darkness within her. Are we sure she’s not an actual Winchester? She fits right in. We’ve certainly had many (many) moments of Dark Sam. And now we’re in the midst of Dark Dean. Could you imagine if all the dark sides of these characters came out to play at once? The world would be doomed.

“There’s No Place Like Home” is an enjoyable episode that 1. Features a recurring character I love (Charlie). 2. The monster-of-the-week relates to what’s going on with the Winchesters. So even though the case is closed at the end of the episode, it really speaks to the mythology of the Mark of Cain. 3. The dialogue is excellent (thanks to writer Robbie Thompson). 4. It really helpsÂ develop Charlie and continues to flesh out the character. Love that the show tackled her history. 5. Sam talks to Cas so even though we don’t see him (bummer), we do know he’s out there and is getting updates on what’s happening with Dean.

I am happy that Charlie escaped this episode with a broken bone and some bruises. For a brief moment I thought we had reached the end of the Charlie era. Thought she would have to sacrifice herself in order to rid the world of her Dark Force. I’m also okay with the fact Dark CharlieÂ drove Baby. I’m not okay with the fact Dark Charlie hurt baby. That was so not cool.

I do wish we had seen Charlie learn about Dean’s Mark of Cain. Thought we’d get a car convo between Sam and Charlie. Don’t know if this was a part of the conversation Felicia Day was talking about but during her live tweeting session last night, she did mention this:

Did they actually shoot this? Or did they cut it before they had to shoot it? Because I would love to see this deleted scene. I am so happyÂ Sam got to spend more time with Charlie this time around. And I continue toÂ love theÂ Dean and Charlie connection. She calls him on his stuff. And he calls her “kiddo” and tries to protect her. That is, until he pummels her dark half even though he knows whatever he does to one affects the other. Dean’s working overtime to prevent his own darkness from coming out. Let’s just say it’s a work in progress. But this moment is awesome:

Charlie: I’m not letting what happened to me happen to you.

Sam: Cain found a way to live with it.

Charlie: Yeah, well, there’s one thing that you have that he didn’t. You’re a Winchester. I forgive you, Dean.

Dean: Yeah, well, I don’t. Charlie: I know. That’s kind of your move. How’s that working out for you, huh?

Charlie: Then prove it.

And I really dig how wise Sam’s being. He’s unleashing all these words of wisdom. Last week it was trying to help Dean realize he can control this aspect of himself and suggested, “Maybe part of that powerful force has to be you.” This week, he tells Celeste — I mean Charlie, “She may be dark but she’s still a part of you.” He also tells her that locking away her bad side isn’t the answer. You think Sam knows what he’s talking about? He’s been in this dichotomous situation more than once. More than twice, even. I need more of Sam offering up his experiences as an example for Dean. Sam’s. Been. Through. This. Plus, he’s being a solid force for Dean like at the end of “There’s No Place Like Home.” Much like Dean’s been for him in the past:

Dean: Then let’s get to work.

-I do have a question. Does Charlie really believe Sam’s an albatross when it comes to Dean and his dark side? Here’s what Dark Charlie said: “And you — always letting this albatross hold you back.” Where is that coming from?

-It was scary how Dean’s hand was shaking when he tried to be all good. But the minute he gave into the darkness, his hand was still as stone. Poor Dean.

-Dean’s new (temporary) outlook provided much humor — he’s doing some un-Dean-like things in order to prevent his dark side from coming out. HeÂ eatsÂ egg white omelets. He drinks veggie juice. He’s given up alcohol. He gets a full eight hours of sleep. And he eats kale sandwiches and snacks on raw almonds. He’s living a healthy existence. And it’s torturing him. He rather go back to cheeseburgers and booze. His struggle to do the good, healthy thing instead of letting his vices take over is fascinating to watch. Meanwhile, Sam doesn’t have to try. He’s almost always healthy. I think it’s great how Sam LOVED the egg white omelet. That’s so him.

-Love that classic photo of Celeste/Charlie in that file.

–Aliases: Sam was Agent Gabriel (Peter not the trickster lol); Dean was Agents Collins (I’m going to say it’s Phil, not Misha ha!) and Presley (as in Elvis).

-Hmm…now that Felicia Day’s been in five episodes, how would you rate them? For me:Â

4. The Girl with the Dungeon and Dragons Tattoo

1. LARP and the Real Girl

Jensen helped me w/ the fight stance so I didn’t look dumb. He made fun of me once and I got mad and punched him really hard. #Supernatural â€” Felicia Day (@feliciaday) January 28, 2015

Supernatural airs on the CW Tuesdays at 9/8c…until March 18, that is, when the show switches back to Wednesdays.