Survivor’s Remorse: “The Thank You Note” 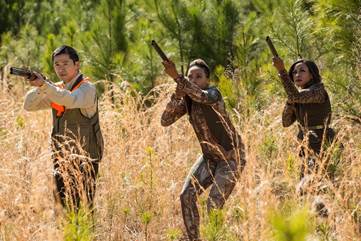 On Starz’s Survivor’s Remorse, the death of Uncle Julius is truly sad, but at the same time, it’s providing some really great story.Â

Allison and Cam haven’t been dating all that long but it’s clear he digs her. Before she really gets to establish a relationship with his family, tragedy happens. After all, Uncle J was driving her car when he died. Yes, it turned out to be his fault. But still, this is a big loss for Cam. And Allison definitely feels some guilt.

So when it comes to making connections with his family, things are a little shaky. SheÂ doesÂ eat dinner with the family. She takes (or tries to take) part in Cassie’s new podcast. And the family doesn’t hold back when it comes to her either. Which in this world means they will occasionally insult her opinions and beliefs, her looks, and generally everything about her. Even so, I feel like it’s going to take Allison a while to get used to the ways of the Calloways. At times they’re a special brand of crazy. But they’re also tight.

In Season 3, M-Chuck continuesÂ to pursue some serious character development. In the premiere, we found out she wants to go to college and do more than just live off her brother’s money. In “The Thank You Note,” we see her in therapy. The therapist asks her what pisses her off and, of course, this is Mary Charles so what doesn’t piss her off?

Her answering rant includes interesting things like her mother (mentioned more than once, of course), her father, the fact that she stops being attracted to women after she’s had sex with them five or six times.

She says her brother, who ends up really having her back in this episode. She talks about people who judge her for being gay, for having a Boston accent, for her always being identified as Cam’s sister instead of the other way around. For her raging period.

While her reaction to this question is expected — if you watch this show you know she tends to ooze and exude anger before any other emotion — it’s still such a great moment. Possibly my favorite of the entire episode. Erica Ash can do no wrong in this role.

What rises to the top of this pissed-off heap are her mother and bio dad. We don’t know who M-Chuck’s fatherÂ is. She doesn’t know and Cassie isn’t talking. It’s becoming an issue. I wonder whether we’re ever going to get an answer. I hope we get one sooner rather than later.

The therapist wants Cassie to join them for a session. Cassie wants nothing to do with that idea. It’s a bit frustrating because all I want is for her to support M-Chuck unconditionally but there’s always something that seems to hold her back.

I’m glad Cam is able to talk to Cassie and she shows up forÂ M-Chuck. Now I’m both excited and scared to find out what happened in that session. I hope we get to see it and there isn’t too much carnage. Cassie and M-Chuck are both wildly vocal. Their putdowns can be brutal.

For Reggie and Missy, Uncle J’s death has opened up their world even more. They’re making big time connections like the Freemans, who sent them food and a consolation note after Julius died. Next thing you know, they’re shooting down birds and playing the thank you note etiquette game.

“Do you want to be who you are or do you want to be who you want to be?” I’m not going to lie. At first, Missy going hardcore to makeÂ Reggie send a thank you note didn’t feel right. It felt like she was going over the top. When she realizes Reggie misspells Dihane’s name, it’s time for them to try to battle the postal service to get that envelope back. I guess I’ve never thought of Missy being someone who cares so much about what other people think. She hounds Reggie until he agrees to fix the situation.

Missy: We’re doomed as a power couple. We don’t communicate.

I will say it’s fun when Reggie can’t get the note away from the postman. The guy has pride and ethics and wouldn’t encourage what is a federal crime. So Reggie comesÂ clean with Mr. Freeman, switches the envelopes, and shares a nice exchange with Richard, who admits his wife would have had an issue with her name being misspelled. Too bad the woman has no problem getting Uncle Julius’ name wrong. Julian? Please.

Other than M-Chuck’s pissed off rant — which was the highlight of this episode — I love Cassie’s first foray into podcasting. It goesÂ every bit as bad as you think it would. She has good intentions but when she has her guests (Cam, Allison, M-Chuck and Chen) select awkward questions out of a jar, things goÂ so very wrong. It ends up with Cassie exiting stage right.