Supernatural Preview: “The Things We Left Behind” [VIDEO] 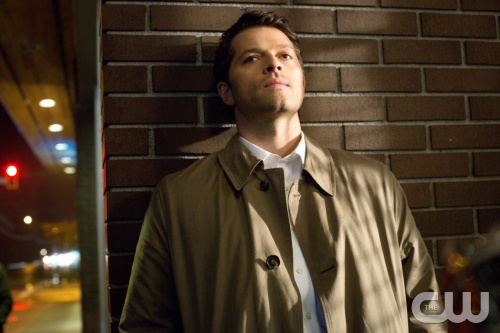 After a series of monsters-of-the-week episodes, we’ve finally reached aÂ SupernaturalÂ that involves mythology and the personal stories Jeremy Carver has talked about over the last few months.

There’s Dean Winchester and his Mark of Cain. Will he demon out sooner rather than later? Sam Winchester knows something’s going on with his brother. Will he be able to prevent a catastrophe from happening?

Who would have thought that we’d meet Crowley’s mom? There’s no way his relationship with Rowena will be anywhere in the vicinity of functional.

Then there’s Castiel, our favorite angel. Hannah’s gone. Last we saw him, he was looking up information on his vessel, Jimmy Novak. Tonight it seems like we’ll get a little of everything.

Synopsis for “The Things We Left Behind”:Â CASTIEL REUNITES WITH JIMMY’S DAUGHTER CLAIRE — Castiel (Misha Collins) finds Jimmy’s daughter Claire (guest star Kathyrn Love Newton) in a group home and she convinces him to break her out. After she runs away from him, Castiel calls Sam (Jared Padalecki) and Dean (Jensen Ackles) to help find her before she gets in trouble. Meanwhile, Crowley (Mark A. Sheppard) faces his biggest challenge yet. Guy BeeÂ directed this episode written by Andrew DabbÂ (#1009).

At Creation Entertainment’s recent Salute to Supernatural convention, we got the chance to take part in a round table involving Misha Collins. He teased Castiel’s journey…

Misha Collins:Â I think itâ€™s going to be a great little arc. I donâ€™t even know how little the arc is or how big it is. We so far are doing two episodesâ€¦itâ€™s the mid-season finale and the mid-season premiere. I didnâ€™t even know that term existed — mid-season premiere — until recently, but those two episodes are going to focus on, not exclusively but a big centerpiece of those episodes is going to be the relationship [between] Claire and Cas and I think and I hope that thereâ€™s more to come. Itâ€™s not immediate after that but I think that thereâ€™sâ€¦looks like thereâ€™s more, a possibility there, and itâ€™s going to be cool, I think.

Extended Promo for “The Things We Left Behind”

Since the CW dropped the trailer for tonight’s episode on the masses, we’ve been freaking out. It looks beyond intense andÂ we’reÂ thankful and hopeful that we’re finally going to deal with this Mark of Cain business.

Clip fromÂ “The Things We Left Behind”

The Trouble with Haven's Fifth Season (So Far)