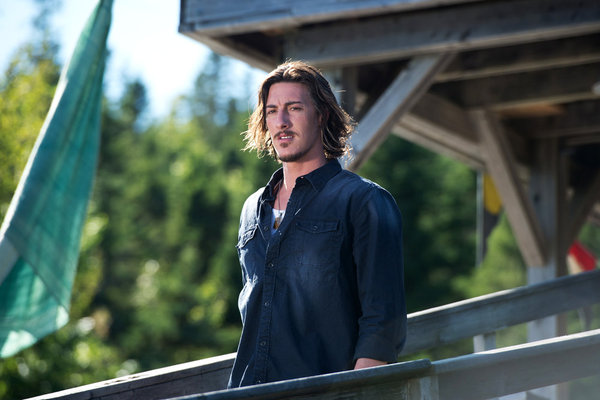 Franklin & Bash‘s latest episode incorporated a bet, a psychic who was fired from a finance company, and a case that featured pirate law and a parrot as part of the way to get to the truth. Plus, the Rob Lowe references have escalated and admittedly, I can’t get enough of it. I liked Rachel realizing Carmen has mad skills when it comes to investigating. If Rachel’s starting to utilize Carmen then, hopefully, that means we’ll see Dana Davis more. And that’s only good in my book.

My only complaint — I’d like to see Heather Locklear have more fun with her role. This is a fun show. I know she plays a bit of the heavy but I’d like to see her lighten up just a tad. I’m glad Rachel let the boys have their surfer mornings, though.

It’s time for some Guest Star Goodness for “Captain Johnny”:

F&B Role: Geno, the surfer/Fish & Wildlife guy Peter clashed with on the beach in Malibu. He brings his cousin’s case to Jared and Peter.
TV Credits: Balfour is a veteran of the small screen having been on Buffy the Vampire Slayer, Six Feet Under and 24. Currently he plays Duke Crocker on one of my favorite shows, Syfy’s Haven. Back in March, Balfour tweeted that he was going to making a cameo on Haven writer Matt McGuinness’ other show, which just so happens to be Franklin & Bash. I feel like it turned out to be a little more than a cameo, however, which is awesome.

Matt Battaglia
F&B Role: Johnny, the green, socially conscious fisherman that Franklin and Bash helped out. He pays Jared and Peter in pole-caught tuna. And a parrot helps him win the case.
TV Credits: I think I know Battaglia the best from three roles: On Friends,Â he played Vince the tough but sensitive firefighter, one of the two guys Phoebe was dating at the same time. He played J.L. King on Days of our Lives back in 1997 and on Queer as Folk, he played an in-the-closet pro athlete who had an affair with Emmett. The character eventually comes out.

Guest Star Goodness: The Good Wife “Everything is Ending”