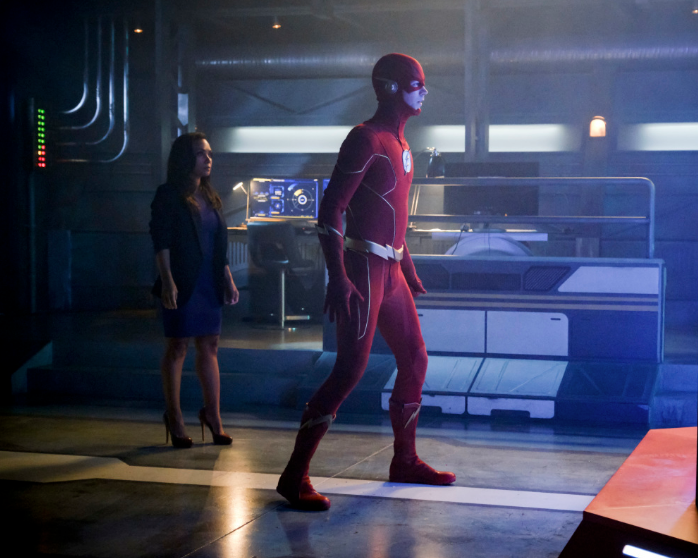 The sixth season of the CW’s The Flash feels like a new phase for the superhero series.

Nora is gone. Barry and Iris will have to come to terms with no longer having their adult daughter around. Cisco will have to (again) solely rely on his massive intellectual skills after taking the cure that’s de-Vibed him. Caitlin’s been gifted with a new Killer Frost suit. Sherloque has gone back to his Earth. And Ralph Dibny, well, over the last season he’s gained a whole new confidence in himself and his investigative and heroic skills.

And as is the case with just about every aspect of the CW’s carefully plotted Arrow-verse, a crisis is coming. Whatever this ultimately looks like, it’s going to be huge. And it has the potential to change everyone and everything as we know it.

But let’s start with one of the show’s current executive producers, Eric Wallace. While he’s been part of this Flash (multi)-universe since season four, he’s the one with the opportunity to usher in this new phase now that he’s the sole showrunner of the hit action drama.

One of his biggest challenges in constructing season six is the gigantic endeavor known as Crisis On Infinite Earths. Something you need to know about him. His optimism is contagious. He’s already saying he considers Crisis “the best thing to ever happen to our show.”

One thing is for sure. The effect this crossover is having is for real. It has caused the writers and producers of The Flash to creatively divide the season into three distinct parts: Pre-Crisis, Crisis and Post-Crisis.

The Flash EP also says that what we’re about to get is a “thrills and chills season.” Much like the days when Zoom was the villain.

What else he talks about:
-This year’s villain
-Captain Cold
-More about Crisis and honoring the moments from the comic book
-Which character is going to change and grow the most
-Teases back half of season six
-Bart Allen
-Post-Crisis
-What’s next for Barry and Iris — which will be set up in the first couple of episodes
-The team coming closer together
-Cisco and his lack of powers
-A Wally West appearance?
-Crafting a season villain arc w/ the presence of Crisis
-Whether there will be a lighter tone in season six
-New sets or scenery

What Sawyer Talks About:
-The Book of Ralph
-Ralph and Sue Dearborn (Dibny)
-Ralph and Sherloque and Working with Tom Cavanagh
-Enjoying the detective aspect of his character
-Ralph and Cisco in season six
-Ralph being more independent and also there being a wingman situation
-Ralph Dibny the leader and the character’s growth
-Ralph and Crisis
-Ralph’s costume

We now know who one of the season six villains is going to be. Heroes star Sendhil Ramamurthy is on board to play Dr. Ramsey Rosso/Bloodwork. The actor and his new big bad of a character played a prevalent role in the show’s Comic-Con trailer.


The CW recently released the synopsis for the very first episode of season six called “Into the Void”:

While Barry (Grant Gustin) and Iris (Candice Patton) deal with the heartbreaking loss of their daughter, Nora, the team faces their greatest threat yet — one that threatens to destroy all of Central City. Meanwhile, Killer Frost (Danielle Panabaker) has a brush with death that results in an unexpected new dynamic that will change her relationship with Caitlin forever. Gregory Smith directed the episode written by Eric Wallace & Kelly Wheeler.

The season six premiere of The Flash races to air Tuesday, Oct. 8 at 8PM ET/PT on the CW.