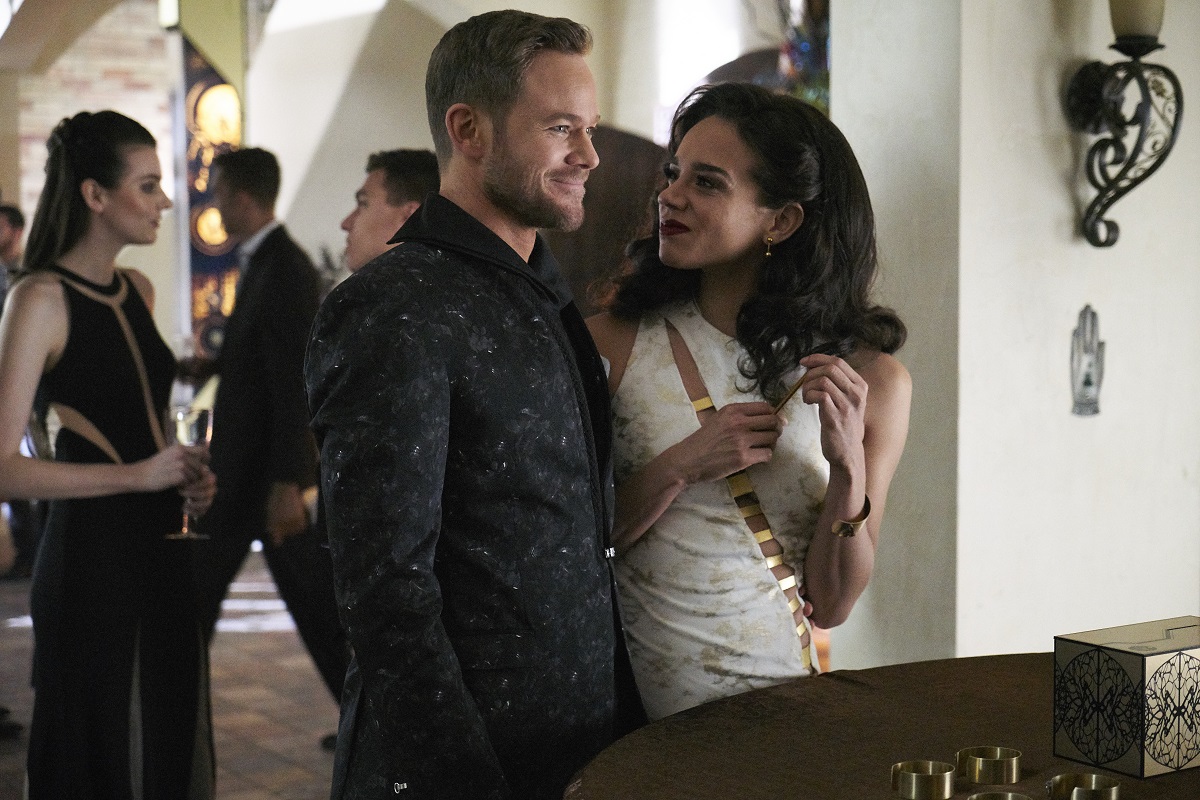 Just two more sleeps until Season 4 of Killjoys lands on our TVs and your patience will definitely be rewarded. Promise swear. The season premiere takes a pause of sorts on last season’s finale and instead delivers a delicious Dutch and John flashback tale wrapped within the current timeline.

The episode is a fantastic Valentine for fans who’ve watched the show since the jump, with some lovely meet cutes trickled throughout and the answers to a few longtime origin story questions. When I visited the set in March, I sat down with Hannah John-Kamen and Aaron Ashmore to talk about the new season, and they weighed in on capturing that “new friend” vibe after three seasons of playing besties.

“It’s amazing because we’ve referenced [their history and in-jokes] all the way since Season 1 and we get to see that. We get to go back in time and that’s so beautiful. It’s a wonderful thing. Especially with me and Johnny, there’s such an amazing curiosity there,” says John-Kamen.

“I even want to watch. How did they meet? I want to know. I want to know their first mission. It’s going to be really fun to go back in time and see them figuring out their relationship. Dutch and Johnny’s relationship is so amazing. I remember Stefan [Plescynski, who directs the season opener], described it like a well. It’s so deep, and it’s past friendship and past love and they’re soul mates, Johnny and Dutch.”

It was an intriguing challenge for Ashmore to play no history now that they have it vs. beginning the show when he and John-Kamen had just met. “It was really fun, also difficult. Sometimes it’s easier to fake history. When we started the show, [Dutch and Johnny] were supposed to have been working together for a few years. That’s easy to fake,” he says.

“Once you know somebody really well, it’s hard to dial that back and it’s interesting to try and remove the connection you have with somebody to pretend that you don’t know them. That’s actually more difficult than the other way around.”

“Dutch and John still have a lot of chemistry [in the episode] and get along, but it’s a different dynamic. It was fun to play around with younger versions of them and their relationship and them getting to know each other. I got to wear more guyliner. Apparently at that time, John liked eyeliner and at some point he stopped wearing it.”

The episode also breaks a bit from the serial nature and revisits the old Season 1 caper formula. “Over the long run, the [monster of the week] episodes can get old because it gets formulaic, but to get to go back and do one of those was really fun,” Ashmore explains.

We also get a glimpse of Johnny and Lucy. “It’s nice to see that that relationship developed as well. It’s not like they just hit it off. It’s very realistic. He tried to steal her and she’s not giving him any leeway,” he points out. “He has to earn her trust. He has to show her that he’s changed or worth her time. It’s cool to see that relationship develop and that it has developed into something different.”

Killjoys returns Friday night at 10 pm/9c on Syfy and Space Channel. If you missed it, our countdown coverage is here. We’ll have more of our interviews as the season progresses, and check back after the season premiere for my exclusive chat with Michelle Lovretta, who wrote the episode. Here are a couple more sneak peeks of the season ahead.

Wayward Pines Preview: “One of Our Senior Realtors Has Chosen to Retire”