UP Television’s newest film, Rocky Road is a sweet confection (get it?) about a Wall Street bigwig who finds out he can go home again, even when it’s not his choice to do so.

The cast is led by Glee‘s Mark Salling, who plays Harrison Burke, an investment banker with a fairly inflated sense of self who gets knocked down a peg or two when he’s downsized. Haven‘s Chief Wuornos, Nicholas Campbell, who y’all know I also love because of Davinci’s Inquest, plays his dad, who’s built a nice life back in their hometown as the local ice cream man. Also in the cast areÂ Steve Byers from Alphas andÂ Rebecca DaltonÂ from The LA Complex.

It’s a family film that’s about a nice family thatÂ everybody can watch together. I love that Campbell took on a role like this (we also just saw him last night on Rookie Blue as a not-so-good dad). The movie was written by Neal H. DobrofskyÂ and Tippi Dobrofsky, who’ve worked on When Calls the Heart and several Hallmark Channel films, including the recent Mom’s Day Away. 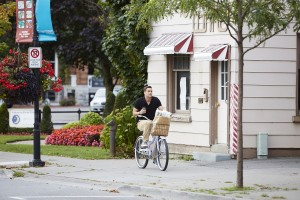 Rocky Road premieres Sunday night at 8/7c on UP Television. Here areÂ aÂ couple of sneak peeks and a look behind the scenes.