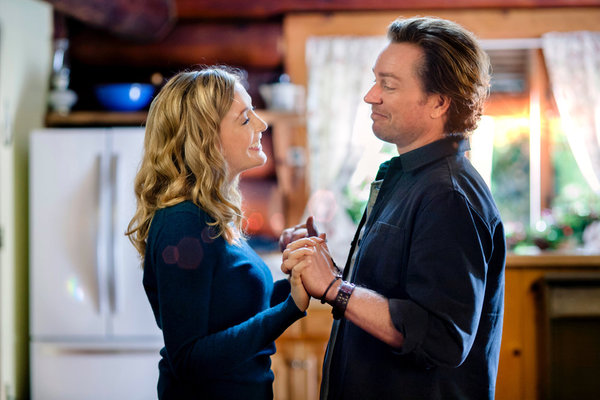 The next one in our 12 Days of Hallmark Holiday Favorites is a little bit of a cheat because one of the movies is on UP, but we think the judges will allow it. Jonathan Scarfe is known to most audiences for roles with a fair amount of swagger. See Hell on Wheels and his current run as Axel on Van Helsing as examples. And if you go back a bit in his filmography, he’s had a good run playing the sh-t disturber. Hallmark Channel and Hallmark Movies & Mysteries introduced Scarfe to a whole new section of viewers, as did UP, with romantic roles where he was a genuinely good guy.

I’ve adored him for years, so we’re not complaining at all about the role diversity. Scarfe has done two holiday movies–2015’s Angel of Christmas opposite Jennifer Finnigan for Hallmark Movies & Mysteries, and this year he reunited with his Ties That Bind co-star Kelli Williams for Christmas Solo. Both are repeating this weekend.

Angel of Christmas is a romance wrapped up in a mystery and set at Christmas as an aspiring journalist (Finnigan) is given the opportunity to write her first feature, which sends her on a quest to trace the origins of a hand-carved angel figurine that is a family heirloom. Along the way, she gets close to an artist (Scarfe), and despite her best attempts to compartmentalize her professional and personal lives, things don’t go to plan.

It’s a really lovely, quiet movie, with a few surprises along the way. That it followed so closely on the heels of Scarfe’s appearance in the equally fantastic Love on the Air was a bonus.

Christmas Solo was an unexpected treat this Christmas season. I’d completely missed that it was being filmed and discovered quite by accident that it was even coming around. In it, Scarfe and Williams play single parents who spark to each other before finding out that their daughters are on fractious terms over who will win the solo slot in the annual Christmas choral recital.

I was all in on them as the married couple at the heart of Ties That Bind, so I was an easy mark to enjoy their immediate chemistry again here. What’s a little different this time around is that they move forward on a romance pretty early in the film and then have to dial that back and re-evaluate when their daughters’ issues escalate. That gives us a chance to see Scarfe in Dad mode, which is also a win.

Angel of Christmas airs Friday afternoon at 5 pm/4c on Hallmark Movies & Mysteries and is available for purchase on You Tube and Amazon. Christmas Solo airs on UP Saturday night at 9 pm/8c and next Friday, the 22nd, at 11 am/10c. Here are sneak peeks of both.

[Programming note: The schedule keeps shifting on some of the Hallmark titles, so set the DVR now to catch Angel of Christmas when it airs.]

As a reminder, you can catch Scarfe every Thursday in Season 2 of Van Helsing at 9 pm/8c on Syfy. Look for him behind the camera, too, as he directs next week’s 11th episode of the season as well as the season finale airing in January.