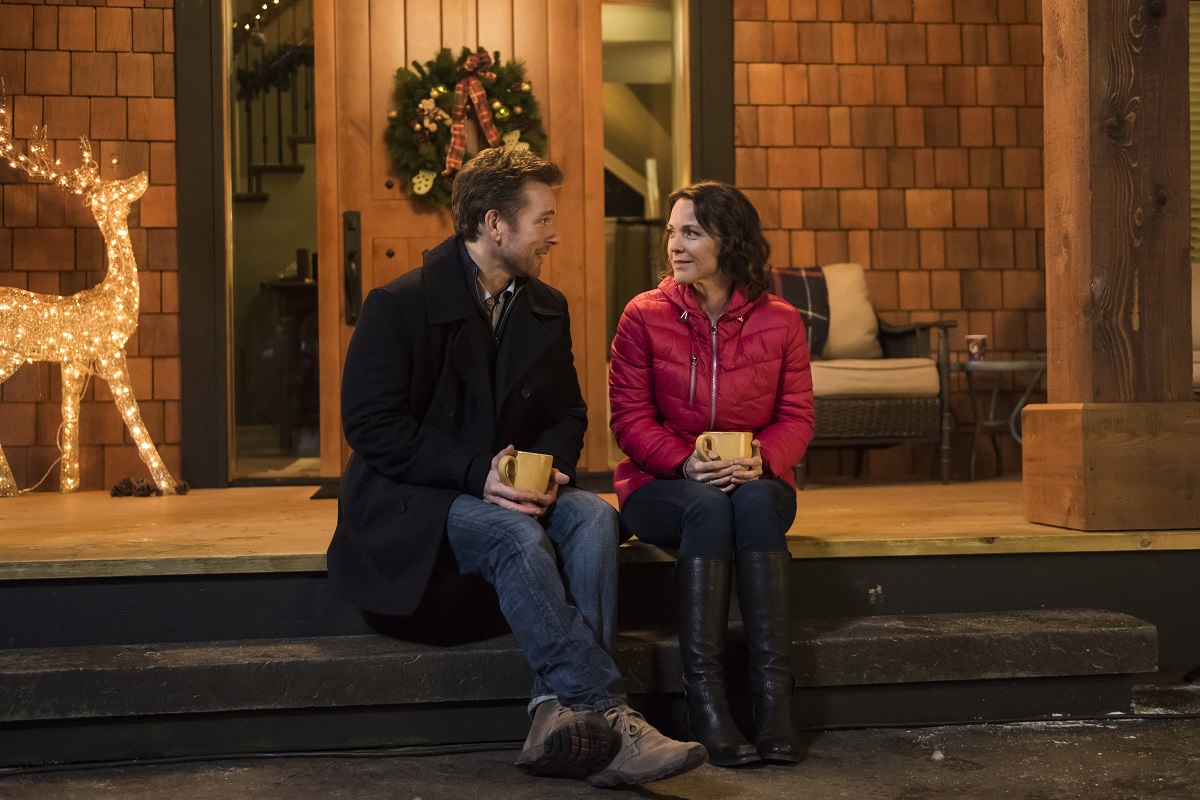 We have our favorites around here, and Jonathan Scarfe is absolutely one of mine. Before he landed on Van Helsing last year, he’d done a one-season turn alongside Kelli Williams in UP Television’sÂ Ties That Bind. Sunday night, Scarfe and Williams return to UP inÂ Christmas Solo, a holiday romance written byÂ Ties That Bind creator Sheryl J. Anderson and directed by frequent Hallmark director Christie Will Wolf.

It’s a darling story about Jennifer and Nate, two single parents doing the best they can to raise teenage daughters. After an an initial meet-cute over Christmas decorations, they find friendship and maybe more with each other without realizing the girls are rivals at school.

That arc is a bit more fractious. Nate’s daughter, M. J. (Kayla Wallace), is a queen bee mean girl who’s the de facto lead soloist in chorus until Jennifer’s daughter, Charlotte (Pippa Mackie), unwittingly challenges her. And not just in school, but also for the affections of longtime friends, Henry (A Gift to Remember‘s Ricky He) and Audrey (Van Helsing‘s Naika Toussaint).

M.J. does not respond well on either front. When the rivalry escalates into bullying and vandalism, it’s up to the parents to intervene. Look for regular Hallmark fixture Lucie Guest, who was in Wolf’s Eat Play Love, as Jennifer’s friend, Christina, and Natalie von Rotsburg (The Art of Us) as choral director, Ms. Baxter.

No disrespect to the lovely young women playing the daughters, but I could’ve totally just watched a movie about their respective parents tentatively navigating a romance that neither expected or was seeking. Scarfe and Williams were so, so good as married couple Allison and Matt McLean in Ties That Bind and they pick that chemistry up again here.

If you’re like me and was so sorry to see Ties That Bind not get a shot at a second season, you will thoroughly enjoy this. Promise, swear. And if you’re just looking for a holiday romance with the something for the parents and the kids, this fits that bill, too. I love seeing Scarfe in these kinds of roles, especially alongside Williams.

Watching them again here made me totally miss their dynamic, and similar to the way Hallmark has no trouble repeating pairings, I vote that Williams and Scarfe do a movie a year together. They’re obviously having a ball, and it’s fun to watch their characters discover each other and then be kind of nerdy about their newfound relationship. I just adored them in this.

Christmas Solo premieres Sunday night at 7 pm/6c on UP Television and repeats at 2 am/1 c and should repeat throughout the season. Click through the title for a sneak peek.