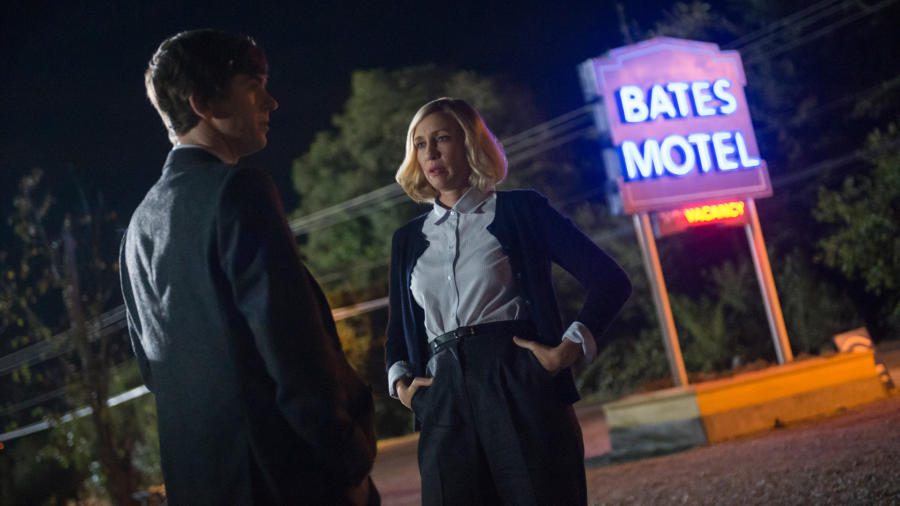 Bates Motel begins its swan song Monday night with an episode that picks up several months after the Christmastime events of the season finale. If a store receipt is to be trusted, we are beginning the following October/November-ish. Y’all know that I had some feels about the way we left things, and while the premiere moved me in a less queasy direction, I’m still sort of bird-dogged by what we missed out on last year.

That ship’s sailed, though, so I have to look atÂ the story left to tell, andÂ there’sÂ plenty. I’m going to be super vague here, even if the trailers have been a bit spoilery, because I watched the premiere cold, with no info, and I highly recommend catching it that way because there are a few surprises worth enjoying as actual surprises.

The basics are that Norman is still at home with the Norma in his mind, living somewhat peacefully and happily until weÂ get the reverse angle of what the rest of the world would see if someone happened to hike the steps to the front door of the manor and walk on in. He’s running the hotel, perfectly amenable to the customers that come andÂ go, except for the oddÂ townie seeking an hourly rate, but that works to his advantage, too.Â In the village,Â he makes a new friend, whichÂ sparks dangerous concerns and tendencies as he weighs his desire for friendship against the reality of what he’sÂ permitted by NormaÂ to do.

In Seattle, a very happy Dylan and Emma are surprised to find Caleb on their doorstep, and he’sÂ puzzled that they’reÂ estranged from Norma.Â [ItÂ strikes me as unfathomable, in 2017, and with aÂ passing mention of Facebook,Â that none of them would know she’s dead, but that’s what they’re sticking with.] Romero is dealing with, but not entirely accepting of,Â the fallout from his arrest while also not yet making peace with Norma’s death or Norman’s role in it.

The tone of the hour is a bit heightened in that there are deeply emotional moments alternating with moments of extreme absurdity and wink nudges (a box of bulk shower curtains, anyone?). It’s a bit of a different animal from previous seasonsÂ which had a layer of dread over the top. Maybe because they’ve pulled the trigger on Norma, and this is the new reality with aÂ terrifically unhinged, unreliable narrator,Â we’re gettingÂ the unfiltered madness.

Norman is still quite lethal, but in a mischievous, almost impish way. It’s a strange combination of happy-go-lucky and murderous. It’s a bit like the glee they felt behind the scenes aboutÂ actually getting to finish the series on their termsÂ spilled overÂ into the darkness ofÂ it all and they left it thereÂ as little glimpses of brightness around the edges.

If you missed an episode of season 4, you have plenty of time with the long weekend to catch up. Bates Motel airs Mondays at 10/9c on A & E. Here are a couple of sneakÂ peeks of season five, which tease the arrival later this season of Rihanna as Marion Crane.