Tonight’s Motive is a timely episode that puts an interesting spin on the immigration debate in Canada and is an unflinching look at what folks who have fled their countries will do, and accept, in order to be somewhere they deem safer than where they were. Guest stars includedÂ Ona Grauer (most recently in Hallmark Channel’s Mom’s Day Away), Hugo Ateo (Canada’s version of Intelligence), and Barbara Kottmeier (several Vancouver-based shows, like Life Unexpected and Supernatural, andÂ  Hallmark Movie Channel’s upcoming Wedding Planner Mystery).

Here’s the official logline: Detectives Flynn and Vega investigate the death of a man trampled by his own horse, and when it becomes clear it was a murder, they are faced with more questions than answers. Meanwhile, with the League of Nations trial looming, Vega expresses his concerns to Sergeant Cross, and prosecutor Samantha Turner confronts Angie about testifying. 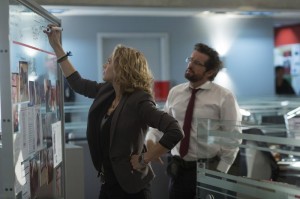 Who Do You Think You Are Preview: "Jesse Tyler Ferguson" [VIDEO and PHOTOS]