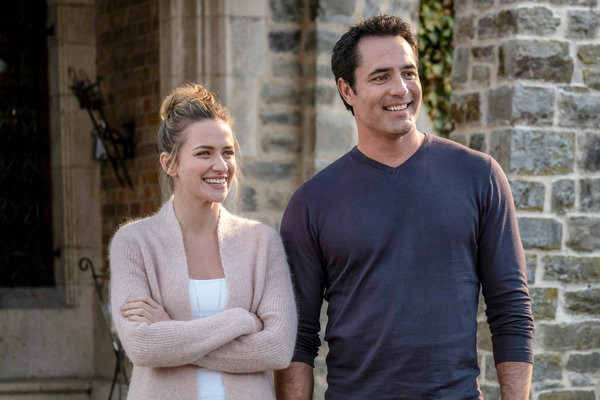 VanSanten plays Violet, a chemist who’s under the gun to replicate the sample of a fragrance her late father left behind. It’s the last of a trilogy of scents and time is of the essence to make it into stores for Valentine’s Day, but she can’t quite capture the combination of scents and the written formula is missing.

Emboldened by desperation and whimsy, she pitches a job to botanist Declan ‘Dec’ Granger (Webster), who has an uncanny sense of smell matched only by that of her dad. He’s also got a history that speaks to Violet’s struggle to balance her life and her yearning to come back to her one true home, something her office manager, Kimmy (Brittany Barstow), is also trying to help her see.

All this is happening in Bruges, Belgium while her life back in Boston beckons. Her businessman boyfriend, Stefan (Proof/Dead Like Me‘s Callum Blue) is along to help her settle affairs but he’s not wholly aligned to her intention to preserve her dad’s legacy vs. cashing out the business.

Things are further complicated by Olivia Caine (Bobbie Phillips, who I’m happy to see has several projects coming this year), a competing perfumery owner who isn’t above subterfuge to get control of the company. And Emma Samms has a small role as a new hire Stefan brings in when Dec’s friendship with Violet makes him nervous (as it should).

The movie was filmed at Christmas on location in Belgium and is gorgeous to look at. Check out Webster’s photography Instagram feed for behind the scenes pics of the shoot.

I’m glad VanSanten got to come play. Her role here is kindred to the completely capable but occasionally nerdy Patty, which she completely she killed at in The Flash‘s second season. If you only know her from her recent kickassery on the first season of Shooter, it’ll be especially fun to see her switch it up here. Y’all know how I feel about Webster, so it’s a given that I’m going to say, “GO WATCH THIS.”

Jonathan Wright directs his first non-Christmas movie for the network, helming a script by Hallmark newcomers Julie Kim and Karine Marwood. I like this continuing trend of using new screenwriters.

Love Blossoms premieres at 9/8c Saturday on Hallmark Channel and repeats throughout the month. Here’s a sneak peek.