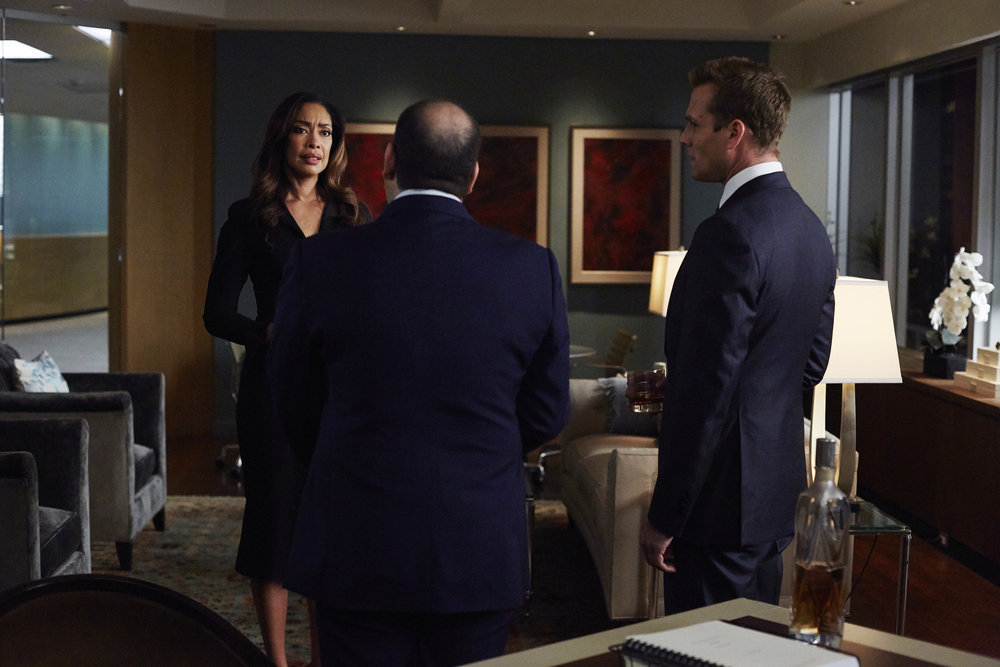 As soon as the Jessica flashbacks showed up, I knew we were going to be in for a major loss.

Don’t get me wrong. It was nice to get some more backstory on a character I’ve adored for five and a half seasons. I remember a time on this show when I kept hoping we would get more to go on when it came to Ms. Jessica “The Fierce” Pearson.

Thanks to Torres, it wasn’t long before I became satisfied with what we were learning about her. The actress took it upon herself to fill in the blanks with her performance. The writers did their part when we discovered more on her failed marriage, her history with Harvey, what she was like in law school, and what life was like at the firm before she put her name up on that wall.

By Season 6, we knew her pretty well. We certainly knew she was unpredictable. We also knew about her devotion to Pearson Specter Litt. She was almost all work no play, even when she met Jeff. She couldn’t quite shake her corporate bottom feeder existence. But now she has. Leaving the firm to move with Jeff to Chicago isÂ something I suspected she might do when she ran into her exÂ a couple episodes ago. To see her actually take the steps and make it happen…Well, I’m happy for Jessica.

I’m heartbroken for me, I’m not going to lie.Â Because I was in serious denial, as soon as I was done watchingÂ the finale, I searched for articles to see if Jessica — and Gina Torres — were actually exiting stage right. Unfortunately, I found plenty of evidence to support this action. At least creator Aaron Korsh said he hopes to have Torres back as a guest star. That’s definitely something.

In the meantime, I can’t wait to see Torres lead her own series or movie. She’s that amazing. I know she’s going to do big things. Having said that,Â I loved her on Suits. I loved her character. I worshiped her mentor-mentee relationship with Harvey. I enjoyed seeing Jessica and Rachel work closely together this season.Â I’m going to miss her something fierce. Torres is a powerhouse. Her absence will be felt.

The one positive side of this whole exit story was the interaction between Donna and Harvey. Donna asked Harvey, who was standing at his window looking out at the city, whether he wanted to be alone. He said, “No.” She walked up and stood right by him and then they held hands.

I was already in tears because of Jessica’s departure. My tears started flooding just a little bit more once these two clasped hands.

It’s been awhile since they shared a truly quiet, intimate moment like this. At least it’s felt like that. I mean, it’s probably simply a gesture of their friendship and deep connection but to distract me from the fact that Jessica’s gone, don’t hate me for wishing this hand-holding was the start of something more. I guess I have an entire hiatus to contemplate what it all means.

Congrats to Louis Litt who finally seems like he’s landed the girl, even though he will be helping raise another man’s baby.

Meanwhile,Â it was nice witnessing Rachel step up in a big way and be an integral force in getting Leonard Bailey freed. It was even nicer seeing Mike support Rachel the entire time. I’m glad he’s out of jail and I’m even happier his jail time wasn’t much of a topic in this finale other than the fact that Sutter tried to smear Harvey’s reputation until Mr. Specter put the kibosh on that.

Now Harvey and Louis will have to figure out law firm life without Jessica. Does that mean it’s just Specter Litt from here on out? Or will they need to add a third person back into the mix?

Good luck to Jessica Pearson with whatever path she decides to take. Same to Gina Torres. One thing I do know is that wherever she lands, you bet I’ll be watching.

Suits returns to USA Network with new episodes in 2017.

Dancing with the Stars "Season 23 Premiere"