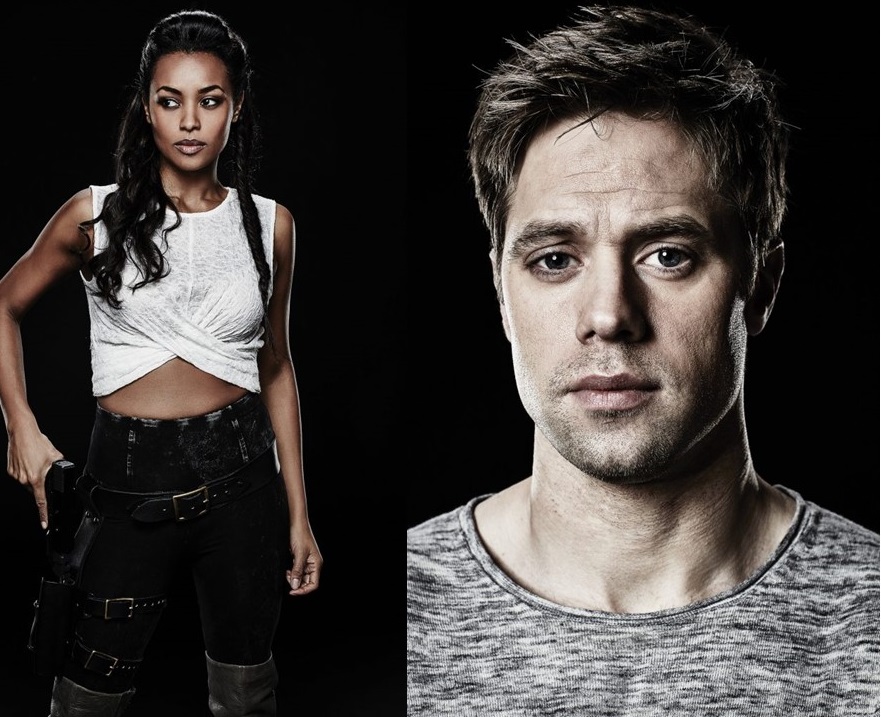 As part of our set visit to Toronto for Syfy’s Dark Matter, we chatted with Melanie Liburd and Shaun Sipos, who join the cast this season as new characters Nyx and Devon. Both gave us a preview of what to expect from their characters this season, and how they felt about joining an established ensemble.

Liburd might be familiar to audiences from Game of Thrones and The Grinder, and you may recognize Sipos from his CW roles on The Vampire Diaries or Life Unexpected. Both were excited to join the show in year two.

“As an actress it was a dream. My character is so much fun to play and everyone is so friendly here,”Â Liburd says. “t was interesting going script to script. I was thinking whatâ€™s going to happen. I think I know, and second guess it, then the complete opposite happens which is also fun and keeps you on your toes.”

“[This has been] probably one of the most pleasurable experiences I have had so far,” adds Sipos. “Everyone is extremely professional and really kind. Thereâ€™s no egos and everyoneâ€™s really supportive of doing good work. Itâ€™s been a really nice transitional experience for me.”

Nyx meets the crew in prison. “[She] has been in and out of prison for most of her life and she uses what she has to get her along the way, whether thatâ€™s using charming or hustling,” Liburd explains. “[In season 2], she is still finding out about the members of the crew but sheâ€™s having moments with all of them.”

One of those moments involves a fight scene with someone we won’t name. “Iâ€™m really excited to see what happens with our relationship as itâ€™s great to have two girls that get on together and kick ass together,” she says.

“Iâ€™m not sure where itâ€™s going to go. At the moment I feel like we are bonding, as I am with others. I have been doing some staff training and hand-to-hand combat which is great fun. [They’re] putting me through my paces and teaching me a few things.”

Devon is a doctor joins the crew after coming to their aid, and Sipos explains that he has the benefit, and curse, of all his memories. “Devon is a guy with a dark history. He has some traumatic events happen in his past and ended up in a prison with these guys. He ends up joining their crew and brings some medical expertise that comes in very valuable to them,” he explains.

“[He] is fully cognitive of who he was and where he came from and what his demons are. He believes heâ€™s done wrong and that haunts him. He struggles with those and wants to inflict some sort of pain on himself. [He] firmly believe he has to pay for what heâ€™s done and his actions support those beliefs.”

Sipos is enjoying fleshing out a new character. “The scripts are the writers’ bible for the character but of course itâ€™s a 60-minute ensemble show [so you don’t] have a complete encyclopedia for your character,” he points out. “You have to go inward and create stories that matter to you as an actual human being.”

“Then youâ€™re on set and have actors that are very talented and that are in the moment. They bring you things you didnâ€™t see when you were prepping. They come at you a certain way and you have to hope your preparation, in terms of who this character is, is solid enough to react in a truthful way to what is being presented in front of him. Itâ€™s an interesting journey to create a character and itâ€™s not a monologue youâ€™re not fully in control of.Â You do your work then you let go and hope itâ€™s there.”