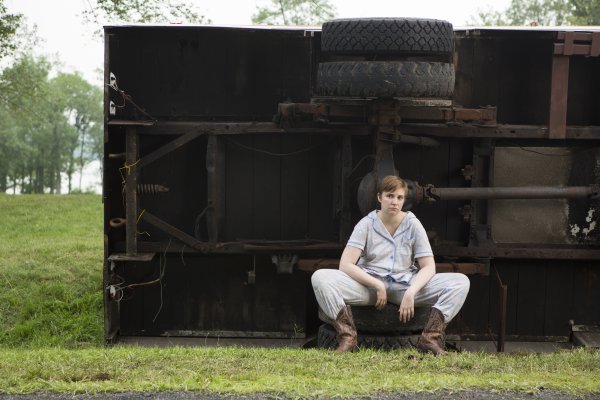 We are in the home stretch for what has turned out to be an excellent fifth season of HBO’s Girls. Things are progressing in messy fashion right about now…in a good way, of course. Let’s break things down.

Moving in together wasn’t a positive thing at all because Hannah and Fran’s relationship has fallen apart. Fran’s on to the fact that Hannah isn’t what you’d call the nicest person on the block. And Hannah’s realizing that Fran isn’t the one. Plus — and this is a great big gigantic plus — she’s finally figured out that Adam and Jessa are together. It happened at Adam’s very pretentious play — she spotted Jessa watching Adam in action from a fire escape. It all looked like a very twisted fairy-tale scene. One that didn’t have a happy ending. No, instead of going through with her break-up with Fran, she stayed with him. All in the name of not being alone.

Marnie toldÂ Ray that she left Desi but said she wants to be alone. Ray was probably hoping for a different declaration but he did tell her he’s sorry for what she’s going through. It’s good to see that Marnie’s self-aware enough to understand that she knew her marriage was doomed way before she ever got married. But she went through with the ceremony why exactly? Chalk it up to life experience? However, she’s not done with Desi just yet. HeÂ tracked her down at said pretentious play where he revealed thatÂ one of their songs is going to be featured in a major way in a Grey’s Anatomy episode thanks to the show’s big time music supervisor, Alexandra Patsavas. So now they have to ride the wave of success. They’re going on tour.

Oh, Elijah. His relationship with Dill was bound to hit a snag…or multiple snags. He’s dating someone famous, after all. At Dill’s posh party, Elijah got to know his friends. He also learned a little too much about Dill’s extracurricular activities. It wasn’t fun for a very cleaned up — and suited up — Elijah to discover his relationship with the news anchor isn’t close to anything anyone would call exclusive. Don’t think that’s Dill’s MO. It was more than simple gossip which is why Elijah left the party. Cut to a drunk Dill showing up at his door. Elijah let him enter and the two reconnected. But it still leavesÂ me wondering what the future holds for these two.

The show hits pause on the Dill-Elijah drama for this week.

Stranded after her summer road trip with Fran is cut short, Hannah is rescued by Ray, but their trip back to NYC gets derailed. When he hasnâ€™t heard from Caroline, Adam stops by Lairdâ€™s (Jon Glaser) place and stays to help with the baby.Â Back from Japan, Shoshanna (Zosia Mamet) gets a wakeup call over a sushi lunch. While recording a new song, Marnie is given parameters for her relationship with Desi (Ebon Moss-Bachrach).