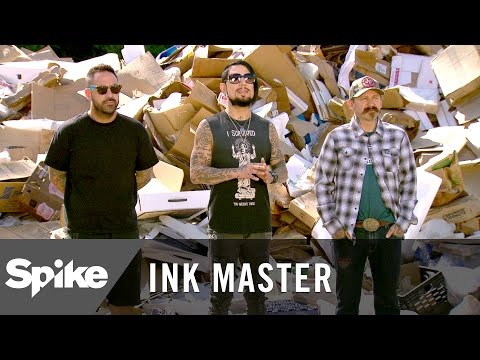 Iâ€™m not quite sure why Iâ€™m drawn to this show, but I love it. I have no desire to get a tattoo on my body, but I sure do seem to have opinions about the art on other peopleâ€™s skin. In real life I keep my thoughts to my myself, but when I watch this show I get so into it. I think what I enjoy most is the artistry. I want to see how each potential ink master interprets the challenge, how they work with their canvases â€” who can oftentimes be difficult, and then hear what the judges think of their work. I take the critiques quite seriously, although I sometimes disagree. And itâ€™s always interesting to see whether or not the artists can take criticism.

Season 7 is going to be different and the first episode, “Initiation,” shows us that. Now, I donâ€™t pretend to be an expert on this show or tattoos. I havenâ€™t watched every episode, but I have seen quite a few. So, when we started off with only 8 artists, that was a signal that things would be different. And I’m a fan of this twist. I like that the show is pitting new artists against the veterans. Do the people who’ve been on the show before have an advantage? Yes, but that should hopefully make the newbies step up their game and show us what they’re really made of.

How important are the fundamentals when it comes to tattooing? For the first flash challenge, each artist must sketch a nude model, assemble a liner and a shader machine and then transfer their art onto a canvas. It was a tough challenge for everyone, but some people really shined. Christianâ€™s a bit lippy for my tastes, but heâ€™s talented. Iâ€™m also really impressed with Megan Jean. Ashley and Picasso get tripped up before they even had a chance to get their work on a canvas. I think Picasso realized heâ€™d have to step up his game, butÂ Ashley seems more interested in giving us excuses rather than showing us her art.

For the elimination tattoo, St. Marq is back and looking for redemption. I know I watched part of his season, but I donâ€™t remember him so I think I tuned in after heâ€™d already left. He chooses the 7 deadly sins in black and gray, using shaders only. And with that, we see that he’s already rattled his competition.Â No liners, no problem? Well, some of the artists had a lot of problems but a few people produced some noteworthy work.

First of all, St. Marqâ€™s tattoo was awful. If youâ€™re gonna talk a big game, you need to deliver. I mean, I fast-forwarded through most of the shit talking, because Iâ€™m not here for that. But St. Marq clearly has a chip on his shoulder from getting his previous â€œearlyâ€ elimination. I just wish heâ€™d shown us something good. His canvas was happy, but I honestly donâ€™t see how. That tattoo was awful.

Corey knew he was in trouble when Christian saddled him with a difficult canvas. She wanted a tattoo on her head and wouldnâ€™t be dissuaded. Corey knew it would be hard to get the detailing he needed without a liner and it ultimately knocked him out of the competition. I didn’t like his tattoo, so I canâ€™t say I was unhappy to see him go home. 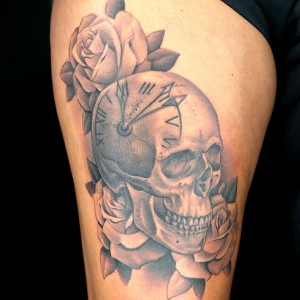 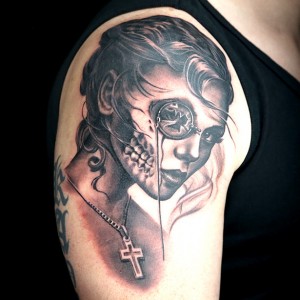 The top tattoos from the episode came from Christian and Megan Jean this week. I liked the judges critique of Christian’s work. It was simple, but great. Itâ€™s clear Christian will be a real contender this season, but Meganâ€™s work was stellar. Her piece was just so beautiful. I like her aesthetic and if we can expect more work like this every week, she will go far in this competition.

Cleen Rock One returns in this week’s “One Man’s Trash.” He made it to the finale in his season, but wasn’t able to pull it out the win. In the preview for the flash challenge, egos collide when the artists must work in teams of 2 to show contrast.

4 teases from the episode:

Once Upon a Time "Souls of the Departed"