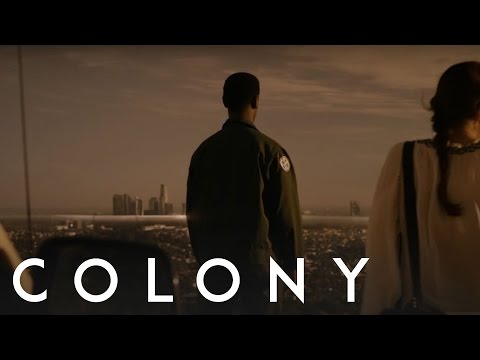 Broussardâ€™s been a mystery for the entire time weâ€™ve known him. But if youâ€™ve been playing close attention, he actually has revealed some tidbits about himself. Tory Kittles explains, â€œthere have been bread crumbs and clues about Broussard and his history sprinkled through the episodes leading up to episode seven.â€

TV Goodness participated in a press call earlier this week with Tory and he had so much great insight to share about his character. He also talked about whatâ€™s coming up for Broussard, his relationship with Katie and what sets Colony apart from other sci-fi shows.

On whatâ€™s to expect for Broussard in this episode:

Tory Kittles: â€œBroussard [is in] a very precarious place. [â€œYoknapatawphaâ€] is the first time, really, that Broussard and Will have come face to face. There was a moment where Broussard had his gun pointed at Will and he doesn’t take the shot because of his relationship with Katie.Â Because he doesn’t take that shot, the story gets flipped on its head and now Will is going to come after him. So itâ€™s a very pivotal point within the structure of the whole season, actually, because everything gets turned upside down.

The first time you meet Broussard, Katie comes to him and she’s asking for his help in finding Will. But he reveals that there’s some parallels because he says, â€˜Guys like me and Will.â€™ So just looking at where he is now and where we’re going to find him in episode seven, there’s been clues that Ryan [Condal] and Carlton [Cuse] have laid out throughout the course of this season to get us to this point. In episode seven, it’s all going to come to a head.â€

On Broussardâ€™s relationship with Quayle:

Tory: â€œWe’re going to find out a bit more about the nature of their relationship in this coming episode. At the end of episode six, Quayle suggests that Katie is a double agent. I don’t think Broussard feels the same way, so there’s a big conflict that he’s struggling with. Here you have someone that’s a mentor that you have a history with in Quayle.

You trust Quayle, yet all of Broussard’s instincts are telling him that he can trust Katie. So I think he’s struggling with himself and he doesn’t know whether he’s been manipulated or what at this point in the story. In episode seven, he’s going to have to do some digging to find that out.â€

On when Broussard realizes Quayle isnâ€™t the man he thought he was:

Tory: â€œThe moment that Quayle plants the seed that Katie is a possible double agent, Broussard begins to suspect that his relationship with Quayle is going to change. It puts him in a precarious place in that Quayle is a mentor. He does have a history with Quayle, he still has a loyalty to Quayle.

But at the same time he’s at odds with that loyalty because he feels that Katie is someone that he can trust as well. So inÂ episode seven, we’re going to dig further into your question and some of those things will be revealed. I don’t want to spoil it for the fans, but I think those questions will be answered as we go along.â€

On the value of keeping Will alive as a source of information:

Tory: â€œBroussard plays a longer game. I don’t think he’s a reactionary. I think his tactical experience and his experience in gathering intelligence and in guerilla warfare have taught him to not make rash decisions. Even though there would have been a benefit to pulling that trigger, I think in a longer game, maybe there is a way that Will can be useful to him or he can be useful to Will. We’ll see that play out.â€

On if thereâ€™s something between Broussard and Katie:

Tory: â€œI think there is a history to their relationship that will be revealed as the season plays out. But I definitely think he cares for her a great deal and he respects her. He understand that he’s a very important figure in terms of not only being a strong figure in the Resistance but someone who he can trust, someone who has an intellect to be able to navigate this world. But mostly I think he feels she’s someone that keeps him off the edge. She would be someone that he can rely on. In this new world, there’s not a too many people you can rely on.â€

On how Colonyâ€™s different from other sci-fi shows:

Tory: â€œIt has so many other elements. At the core it’s a family drama. It’s also a spy thriller and in a lot of ways, it’s an action movie. InÂ terms of Broussard, you don’t know if he’s manipulating people or whether he’s being manipulated. So there are so many different identities that the characters are having to take to survive this occupation. So that’s some of the ways it’s different than it being a typical sci-fi genre show. It just has a broader scope.â€

Broussard questions his mentor, while separately Katie feels cut off from her family and her cell.Â  During his hunt for the Resistance, Will comes even closer to discovering the truth. Up in the Green Zone, Maddie finds herself entangled in a seductive relationship. Finally, Snyder keeps his word, giving Will and Katie a glimmer of hope.

In this episode, it looks like we’ll also get some insight intoÂ Adrian Pasdar‘s Nolan: