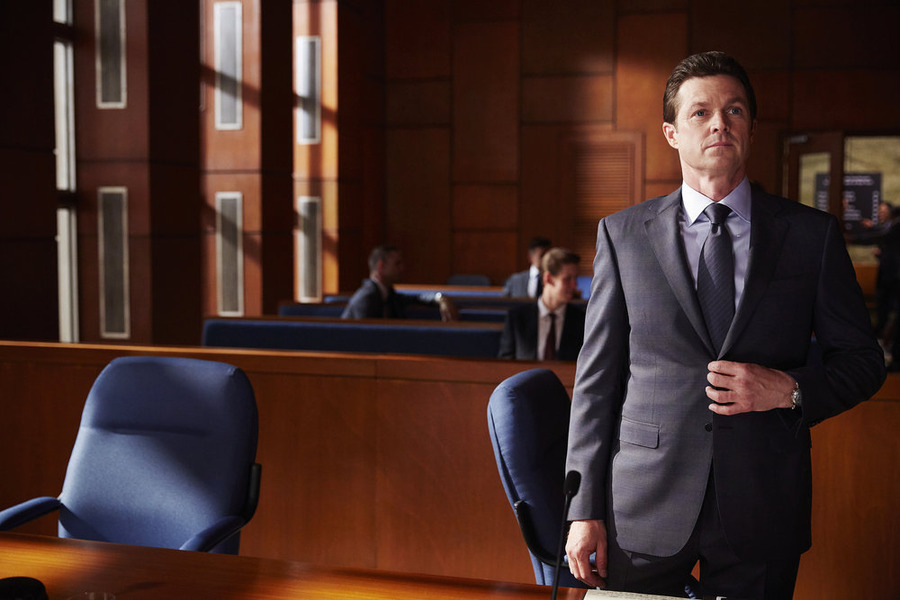 Before previewing “Toe to Toe,” I must discuss last week’s episode:

Donna: What can I do for you, Harvey?

Harvey: I wanted to thank you.

Harvey walks away to the lyrics of Coldplay’s “The Scientist” as covered by Tyler Ward, Kina Grannis and Lindsey Stirling. And when Tyler sings “I had to find you,” Harvey looks back at Donna — not completely — but halfway over his shoulder.

That little half glance over the shoulder action tore me up a little. That’s how much I miss these two being sympatico with each other. Don’t get me wrong, I’m a Gretchen worshiper. In fact, I want to see more Harvey/Gretchen scenes. It’s weird but all this separation and mixed up pairings has me coming to a new conclusion. I think I’m slowly figuring out I might not need Donna to continue to be Harvey’s assistant. I just want them to be good with each other. And someday I’d like them to be more than good, if you know what I mean. I’m never going to give up on wanting those two kids together.

-How good was it to see Amanda Schull? She took time away from her 12 Monkeys gig to make an appearance in “No Puedo Hacerlo.” By the way, if you aren’t watching 12 Monkeys on Syfy, I suggest you rectify that matter pronto. Too bad we didn’t get to see a classic Katrina/Louis convo. I really grew to love their scenes together.

-I continue to digÂ Harvey and Rachel scenes. Rachel gets to learn from both Jessica and Harvey. She’s going to turn out to be a badass lawyer.

-Team Louis and Donna are fascinating to watch as well. I like the push and pull with each other. They feel they can say anything to each other. And hopefully Donna will have more success keeping Louis in check in the future. But not too in check because I love me some out of control Louis — as damaging as that guy can be.

-Jessica, Rachel and Donna’s wardrobes — I’ve always known these three are fierce dressers. But I’ve come to the conclusion that the women of Suits are the best dressed females on any TV show. They are forces of nature in those designer clothes. Kudos to the wardrobe department.

-Yeah, you can consider me on board with an Esther-Harvey pairing. Amy Acker, you’re welcome to return to Suits anytime. Not that you need my approval or anything.

-I still cringe when Mike takes a condescending tone with anyone who’s a real lawyer. He got pretty ballsy with both Robert and Jessica. And while things worked out in Mike’s favor in the end, I hope he thinks twice before accusing his fiancee’s father of being dishonest and borderline fraudulent again. Much like Harvey, Mike tends to let his past color his present a little too much. Meaning the way he lost his parents causes him to fight extra hard for those that are being taken advantage of or are being wronged in some way. That’s actually an amazing trait. But Mike goes a little too far sometimes. The fact Rachel heard him tell Jessica about his doubts about Robert, that was an uncomfortable moment. I’m glad Jessica brought up the “F” word with Mike. F standing for Fraud.

When Harvey’s bitter rival Travis Tanner turns up on the other side of a case, claiming to be a changed man, Harvey and Mike must decide whether to believe him – or bury him.

As Harvey’s sessions with Dr. Agard continue, she links his personal stake in the Tanner fight to issues from his past.

Meanwhile, Jessica tasks Louis to make things right with Harvey, and with Rachel and Donna’s help he devises a plan – one which could make an enemy of the formidable Jack Soloff.

–Eric Close reprises his role as Tanner. Close recently played Teddy Conrad on ABC’s Nashville. However, he will not be returning to the music drama as a series regular. I’m betting he’ll be on board as a guest star at some point considering Teddy is Rayna’s (Connie Britton) ex. Last we saw of Teddy, he was in handcuffs. He’d been a bad, bad boy/politician.

-I’m happy that Harvey’s sessions with the shrink will continue. I’m super interested in him getting his past dissected. I still feel like there’s so much we don’t know about him and this is Season 5.

-And if Rachel, Donna and Louis are teaming up — well, I’m totally on board for this. Big time.

-Same goes with a classic Harvey and Mike vs Tanner showdown (or is it a showdown?). I wonder what movie or pop culture reference the two will make as they figure out how to defeat the evil villain that is Travis Tanner. I know the synopsis states that Tanner claims to be a changed man but I don’t buy it. This is something I’m going to have to see to believe.