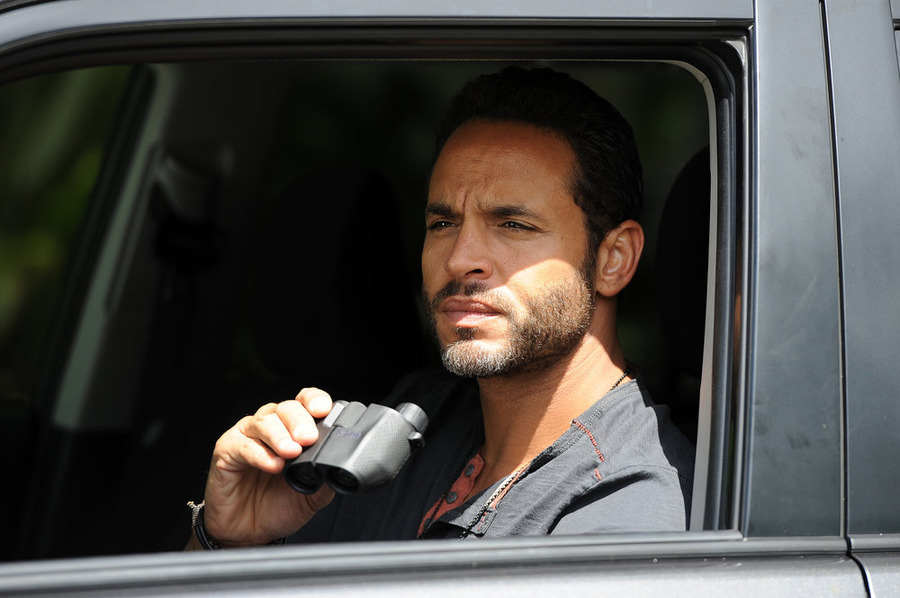 The entire episode was crazy intense.

Briggs knew someone was in possession of the tape that proved that he was Odin and that he killed FBI Agent Juan Badillo.

It turns out it was someone in Graceland…in what has been a home for Paul, Mike, Jakes, Charlie, Paige and Johnny.

And now we know who that person is.

When “Home” ended with the Charlie vs. Briggs confrontation, I couldn’t believe what I just saw. It was heartbreaking. This couple that I love so much. Their relationship was in pieces. Just shattered. And I don’t know if there’s ever a way to get what they had back. Paul lied to Charlie (repeatedly). At one point, she felt so guilty for accusing Briggs. The guilt weighed heavy on her. Not just guilt over what she thought was a false accusation. But the guilt over Badillo’s family being left to go it alone.

Confession: Briggs is my favorite character on the show. I attribute that to the way Daniel Sunjata plays him. But, man, when he thought Mike was the one with the tape, he manipulated almost every aspect of the bank robbery. And the end result of his mission was supposed to be Amber killing Mike. When Amber locked Charlie in the vault and went after the “rabbit” who was getting away with her money, Charlie knew what was up. That’s when she called Paul and played the tape. Thankfully, he was able to save Mike in time.

With Badillo, that was self defense. He pretended to be Jangles to get the goods on Paul. But setting up Mike to be killed shows he’s a man that’s out of control. He wasn’t sleeping. He probably wasn’t eating much. He was undercover with these dirty cops. That first phone call seemed to trigger all the emotions from that fateful night. The memories started taking a toll on him. Yet he still didn’t come clean. Jakes even advised him to do so but he chose to go after Mike instead.

I don’t blame Paul for suspecting Mike. The guy hasn’t been the easiest to get along with this season. And he has a tendency to act self righteous. But the drama’s much richer when Charlie’s the one that knows. Because there’s no telling what she’s going to do with this information. She’s known for two weeks and she hasn’t done anything. But now that he knows that she knows, I’m dying to find out what she’s going to do. There are major things at play here. She’s pregnant. They love each other. What is Charlie going to do? Bring Mike into this? Tell the rest of the house? Turn her baby daddy in through other means? Say nothing but banish him from Graceland?

I don’t know. Charlie’s such a wonderfully unpredictable character. She feels so deeply. And you can see how tired she is. She didn’t want to hear what Paul had to (FINALLY) say for himself. It shouldn’t have come to this, her pushing him in order for him to come clean. She called him a coward. I hate to admit it but he has been through this whole Odin situation. It really pains me to say that.

Sunjata and Vanessa Ferlito were epic in “Home.” It’s kind of crushing to realize that basically any hopes for Charlie and Briggs making a home together have been shattered. And the big dinner scene that took place at home (Graceland) was filled with infighting, accusations and general attitude and bitterness. I loved every second of it.

You have this major revelation that ended the episode. Then add in that fantastic dinner scene that I’m going to have to rewind and rewatch a few dozen times. Johnny comes clean about Lucia. And Jakes has turned into a listening board for almost everyone. And there’s so much anger between Paige and Mike. Plus, there’s the bank robbery and the vibe that everything is coming to a head — this might be my favorite episode of Graceland ever. It was intense, painful, heartbreaking and dark. They hit a deer, y’all! So sad! And oh yeah.Â Charlie (Briggs even called her Catherine) also left Briggs behind in the desert. What else was she going to do? At this point, I think he disgusted her. She couldn’t stand to look at him.

Creator Jeff Eastin tweeted that this was one of his favorites Gracelands ever. But I might have to say this is my absolute favorite…so far. I’m saying “so far” since there are still a few more episodes left in the season.

I’m already hopingÂ we hear about a season three sooner rather than later.

Dancing with the Stars “Season 21 Week 9” aka Showstopper Week

Arrow Conversations: “Everybody Is In This Life For Themselves”