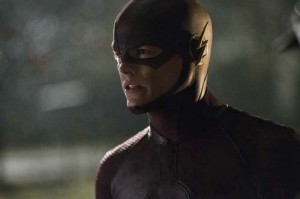 One of the most addictive series on TV (for me) has got to be the CW’s Arrow. And I’m predicting right Â now that the Arrow spin-off known as The Flash is going to be every bit as effective at keeping me constantly entertained.

The reasons toÂ tune in this fallÂ are easy:

-It brings another superhero to life, one I read all about when I was a kid thanks to comic books. That never gets old to me.

–Grant Gustin. Before being cast on The Flash he was on Glee and 90210 so I really never saw him in action. After screening the pilot, it’s clear the producers made the right call in casting him. He’s really talented. There’s a scene at the end of the episode that is heartbreaking and goes a long way into explaining Barry’s motivations for wanting to be a hero. It’s one of the best moments in the pilot. And Gustin pulled it off nicely

-I think they did a good job with assembling the rest of the cast as well. Tom Cavanagh and the writers set up an intriguing character in Dr. Harrison Wells. And anything that gets Jesse L. Martin back on the small screen is a winner in my book.

-The Love angle: Gustin and Candice Patton (Iris) already share a cute chemistry and I’m looking forward to seeing how they develop this relationship. They’re going to throw a mega-sized amount of obstacles in their way. You know they will. It’s going to be interesting to see how Barry and Iris handle all of that. I hope they become a couple to root for.

-While I don’t know if the action on this show will be as good as the action on Arrow (I mean, how could it be), I can’t wait to see how The Flash/Barry Allen develops as an action hero.

-The presence of John Wesley Shipp. How amazing was it to find out that Shipp was joining the show in the key role of Barry’s imprisoned dad? The fact that they’re already paying homage to the 1990 CBS TV series is so welcomed. I was actually a fan of the show (plus, my cousin, Alex Desert, was in it) so I think its great that they’re not only acknowledging that Flash series they’re showing it some mad respect.

TV Goodness got the chance to catch up with Gustin and Candice Patton at last month’s Comic-Con. He talked about the women and the men in Barry’s life as well as playing a brighter, more optimistic superhero. Candice talks about what drew her to the show, her character’s relationships and a crossover we can’t wait to see.

The Flash series premiere airs Tuesday Oct. 7 at 8/7c right before the season ten premiere of Supernatural on the CW.