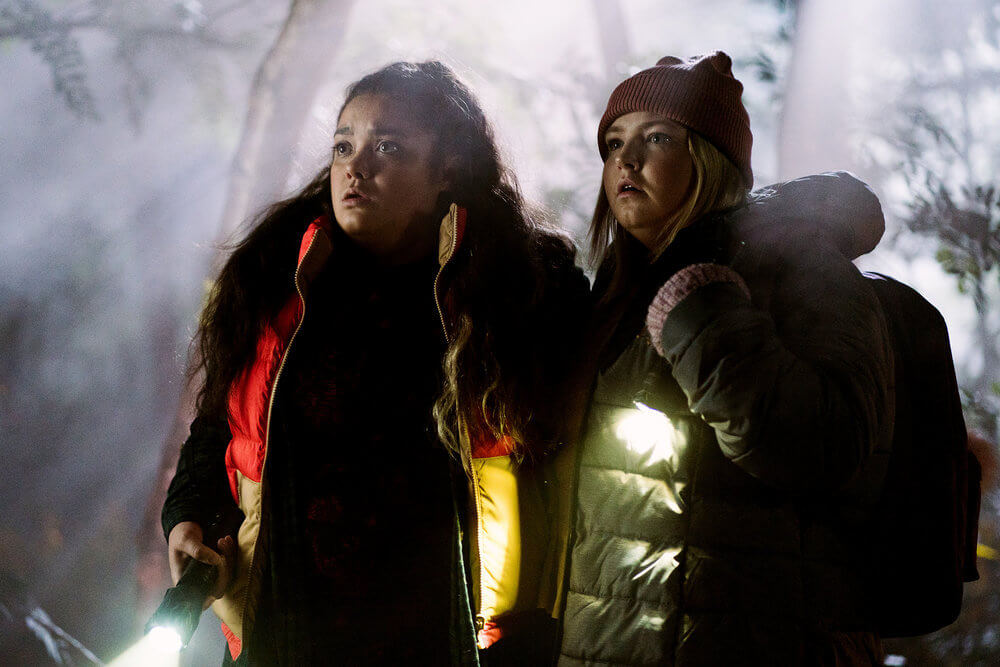 Heroines take many forms, and in Astrid and Lilly Save the World, Syfy’s newest scripted entry, premiering Wednesday at 10 p/9c, the titular heroines are a pair of maligned teenage girls and BFFs who step up to right the wrongs they unwittingly committed when they opened a portal to a hellscape.

Their big oopsie springs from a disastrous attempt to purge themselves of a vile encounter with the in crowd when they decided to check out a house party. While Astrid (Jana Morrison) and Lilly (Samantha Aucoin) aren’t part of that inner circle, they are ride or die for each other, and they make their own fun. Amateur sleuthers who’ve taken to doing recon on their classmates, not-so-inconspicuously, as it turns out, they have earned a semi-stalkery reputation.

When they get called out for it, they decide to burn all their bounty from their surveillance. And wouldn’t you know, their timing just happens to create a tear between worlds that allows boogedy interlopers to cross over and wreak havoc. Thankfully, there’s also a Brutus (Olivier Renaud) in that package deal.

He’s a handsome demon dude who clues them in and tasks them with righting their wrongs in ten easy steps (aka ten episodes). He also offers the pilot’s whole-hearted wink to its foremother when he tells them to think of him as their Giles.

Astrid and Lilly would be well within their rights to let revenge against their tormentors play out when the first big bad starts grabbing the classmates who were nasty to them. Instead, they take the high road, suiting up to rescue them, taking back their putdown nickname, and seizing the mantle of their new quest.

It’s a fun, unconventional horror comedy that also poignantly acknowledges the ugliness thrown toward young women who don’t fit a certain mold. And it squarely embraces body positivity–something Astrid’s further along with than Lilly–while they dismantle demons in sometimes gooey fashion.

Danishka Esterhaszy, one of the EP/directors on SurrealEstate, is a directing producer on this series, which was filmed back in the former show’s Newfoundland stomping grounds. Jill Carter directs the pilot written by series creators Noelle Stehman and Betsy Van Stone.

Astrid and Lilly Save the World airs at 10 pm/9c on Syfy (with the premiere also running on USA) in the US and CTV Sci-Fi in Canada. Here’s a sneak peek of Wednesday’s premiere.

Previewing Don't Forget I Love You