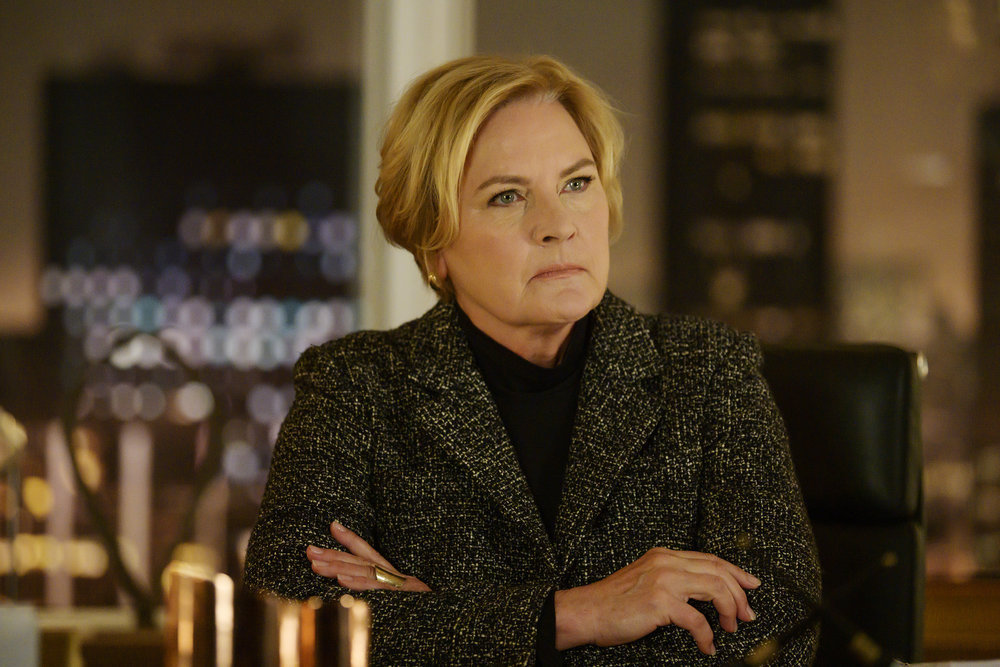 Never thought it possible but these things do happen. USA Network’s Suits is about to get more intense.

There’s an ethical reckoning going on at Zane Specter Litt Wheeler Williams and it looks a lot like Star Trek: The Next Generation‘s Denise Crosby.

The actress plays smart, powerful attorney Faye Richardson, the woman the New York Bar deems worthy to ride on in and clean up the messes Harvey, Louis, Donna, Alex and Sam have made over the years.

Viewers were briefly introduced to the character at the end of last week’s season nine premiere. Joining a series that’s entering its final year could be a daunting undertaking…but it wasn’t.

“it’s been a gift to be part of this. They’re very inclusive,” Crosby says about the cast. “[Suits is] coming to an end and they’re deeply moved by it all. This has been such a key part of their life for so long. Even though I’m a part of it, I’m also on the sidelines watching it all unfold. It’s been wonderful, really.”

The show’s OG actors — Gabriel Macht, Sarah Rafferty and Rick Hoffman — provided good vibes and positive support from the instant Crosby arrived on set. “That first table read we had for the first episode — they did everything to make sure I was welcome.”

They offered up key advice to help her transition go smoothly: “‘You’re just great and we are looking forward to working with you. It’s a lot of words, so we stop all the time. And we’re all dealing with the same thing. You can stop at anytime.’

“They were absolutely right,” Crosby continues. “It took me a couple episodes to get up and running how they do it there. It’s a specific style of show.. It’s a lot of talk, a lot of legalese, not much action. You just have to get into the rhythm of that.”

They also helped her learn the history of the hit drama. After all, Harvey and the gang have been playing fast and loose with ethics since the beginning of the series.

“Everybody’s been so helpful in the sense of talking me through it. You don’t have to know everything, but you understand the big points, and you just realize that this is a firm on the brink of disaster, and I’m their lifeline, actually. Even though they can’t stand that I’m busting them. But, in fact, if they don’t subscribe to my dealings here, they’re done. They’re not going to make it through the year.’

It’s not a shock to find out that not everybody is happy with Faye’s presence, her tactics, her decisions or the power she wields.

“I think there’s some sensible minds there. I mean, I think Katrina understands,” reveals Crosby. “She doesn’t particularly care for Faye’s style, but I think she understands Faye’s point. I think Donna is also a reasonable one in this firm and Faye knows that and appeals to her in that way.”

And then there’s Harvey Specter. “We really do get to stand up and square off. I don’t cave, where others would. But I’ve got the side of the law. I’ve got the law on my side. There’s only so much you can do.”

But right or wrong, the New York Bar feels sending Faye in is the right move. “This is a formidable law firm and [they are] going to give them one last shot to redeem themselves and keep them afloat. Because they’ve had some huge cases, and represented some big clients, and they’re, in fact, good at what they do, they’re willing to give this last shot to them.”

Once the dust settles on the series, Crosby will have guest starred in nine out of this season’s ten episodes. She says she’s excited for fans to see what’s headed their way.

“I think that they’ve been living along with these characters, and they’re invested in these relationships. And I think what this season promises is that you get to go a little more deeply into their personal lives. You’re setting up, really, this big finale at the end, which is going to force them to decide who they are. Who are these people and what kind of lawyers do they want to be?”

Crosby’s character gets a lot more screen time this week than she did last week. The second episode of this final season of Suits airs tomorrow night. “Special Master” premieres at 9/8c on USA Network.