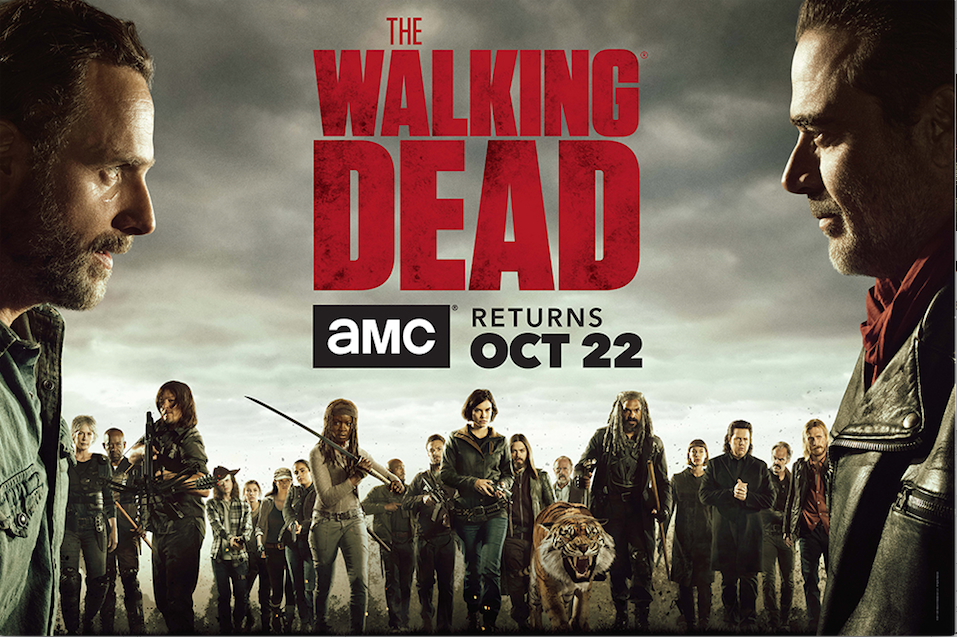 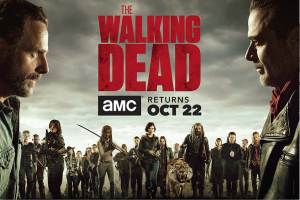 Tonight isn’t just the Season 8 premiere of AMC’s zombie juggernaut The Walking Dead. It’s also the show’s 100th episode. At a press conference that took place at New York Comic Con, there was some discussion about the episode as well as hitting this major milestone.

Andrew Lincoln (Rick Grimes): Last season, a new character took over as lead of the show pretty much. Negan was introduced and we saw this whole new vista. And you gotta go somewhere to get somewhere and I think they needed to break me down in order to come back stronger than ever before.

Lincoln: And I feel where we left last season is an indication of where we go this season. This is the payoff for last season, certainly in Rick’s terms. The thing that I love about doing the job â€” it’s eight years, it’s 100 episodes â€” is that they keep pushing and pulling and hurting this man in new and fresh and unimaginable ways.

Lennie James (Morgan): I think one of the brilliant things about the characterizations in The Walking Dead and one of the brilliant things for us actors is that people have evolved. If you go back, now that we’re at the 100th episode, if you go back to the first season and look at who those characters were in the beginning, you would not have picked out Carol, for example, as being the one that is the most likely to survive, the one Morgan describes as our greatest warrior. You wouldn’t have picked her out to be that in the beginning but that’s what she’s become.

Greg Nicotero (Executive Producer/Director): These [Season 8 episodes] are some of the most difficult episodes we’ve ever shot. Even the storytelling. We have this season sort of completing a lot of characters’ storylines in one or two episodes instead of letting them play out over the entire season. It’s a very different way that we tell stories. Our new production design team, visual effects, you know, we’re constantly aware of what we’ve done in the past and always trying to top ourselves which is hard, very hard to do. But the actors bring it and we have an obligation to continue to up the game for the show. It’s been eight years and we want people to not feel like the show is suffering from any fatigue.

Nicotero: The first episode has a lot of really interesting nods to previous seasons. So if you know the show pretty well you will see things that are direct callbacks to previous episodes even as much as me shooting shot for shot a sequence that was in an earlier episode. We went into it really â€” number one â€” wanting to give the fans something exciting. People that have been with us since day one, [will] feel like they’ve been rewarded by staying with us for 100 episodes. And the new fans will get a completely cinematic experience with a tremendous amount of amazing stuff.

Melissa McBride (Carol): It’s kind of crazy. It wasn’t even a thought in the head to think…you think it’ll be 100 episodes? Never entered the mind. I was just happy to get three. That’s a milestone.

Norman Reedus (Daryl): We have a room back in the studios that has all the fallen members of our cast from season one and it’s, all of us, they’re all with us for 100 episodes. We know the people that helped us get here and they’re still there with us. And they’re still sprinkled throughout the show. All my best friends are in Senoia, Georgia, you know? These are like my besties. It’s great.

Jeffrey Dean Morgan (Negan): You used ‘besties’ in a sentence.

Reedus: What did I say?

McBride: I saw Sonequa [Martin-Green, ex-Sasha] walk by and you have a spontaneous â€” you run up and hug each other. Same thing [with] Jon Bernthal and Scott Wilson and Steven Yeun. It goes on and on and on. It’s not like we feel that they have ever really left. We just don’t get to see them every day. They’re Walking Dead Family forever.

Morgan: It feels like you’re joining a family. From day one, from the minute Negan walked out of the RV â€” as horrible as that was â€” these guys have been nothing but awesome. And it was an honor being part of their 100th episode. It was really an honor because that’s a really hard thing to accomplish. And I’m not sure when you’re so close to it you even realize it. It’s an amazing accomplishment. And they should all be very, very proud.

Austin Amelio (Dwight): It’s extremely inspiring, too. They got to 100 episodes for a reason. When you step onto the set, their work ethic is insane. The bar is held so high. It’s the most physical and emotionally demanding work I’ve ever done, they do ti with ease. I feel very blessed to be a part of it.

Lincoln: The beautiful thing is, this season, more than any other, I’ve been really nervous about certain scenes. And to be nervous after eight years is a testament to the writers room.

The eighth season of The Walking Dead premieres tonight at 9/8c.

Words for the Living in Better Things "Eulogy"