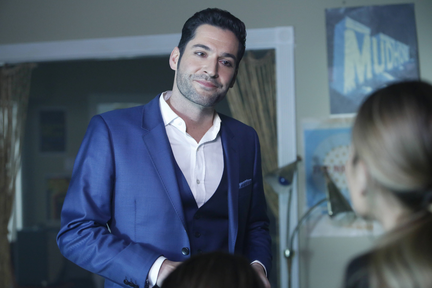 This has been one hell of a hiatus for FOX’s Lucifer, hasn’t it?

On the down side: the last time this show aired it was the end of January. On the up side: during the long, long, LONG break we found out Lucifer will be back for a third season and theÂ show is moving production from Vancouver to Los Angeles, where the series happens to be set.

As for the fictional drama, Lucifer Morningstar took a bit of a break himself. At the end of the midseason finale, he had disappeared leaving Chloe and everyone behind. He could no longer trust in his feelings for Chloe since his Father had put her in his path purposely. Plus, he’s had a pretty rough season two. His little trip to hell to save a poisoned Chloe caused his angst over killing his brother Uriel to bubble up to the surface. He’s pissed at his Mom and his Dad. Consider the devil damaged.

In tonight’s episode, Lucifer’s back. What that means for his friends he left behind? Angst for sure. Well, let’s let Tom Ellis and Lauren German give you some insight:

At WonderCon 2017, we talked to EPs Ildy Modrovich and Joe Henderson as well as a pregnant Lesley-Ann Brandt and Kevin Alejandro about Lucifer‘s much anticipated return, the show moving to Los Angeles and more.

Lucifer's Back In Town and It's Sweet As "Candy Morningstar"