Three Moments of Goodness from The Magicians “Hotel Spa Potions” 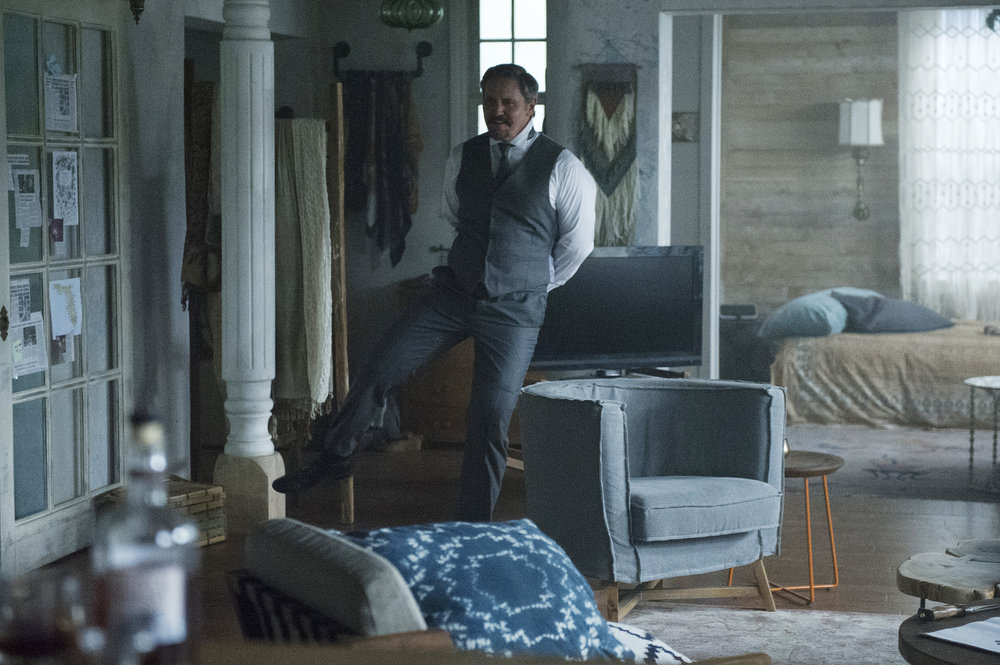 On Syfy’s The Magicians, the characters are in major plan-making mode.

Julia tries to come up with a way to trap Reynard the Fox, her rapist. The Beast is by her side, of course, since he has no choice in the matter. Quentin, Alice, Penny and Margo are back at Brakebills, where Rick Worthy’s Dean Fogg and Anne Dudek’s Professor Sunderland join them in their quest to stop The Beast. It’s time to resurrect Battle Magic 101, a class banned years ago. And in Fillory, King Eliot reveals a piece of his past, one that’s integral in helping his minions. He grew up on a farm. And because there’s a lack of magic to help grow crops, it’s up to him to show the people that a little elbow grease and lots ofÂ fertilizer will help in that regard.

The second I heard Charles Mesure‘s The Beast break out into song, I was hooked. I could have listened to an entire episode of him belting out his character’s dialogue. What a beautiful voice he has. I heard there was going to be more music in the second season of The Magicians, but didn’t realize it would take the form of scenes like this. Julia being annoyed with The Beast was equally as fun as listening to him make music magic.

Penny and the Professor

Penny’s pretty lucky he has hands right now but thanks to his surliness his recently replaced appendages often have a mind of their own. And when he finally tried to go the nice route to fix them, well, let’s just say it was too little too late. So now he’s back at Brakebills where he turns to Professor Sunderland for help. And in the process, they drum up a serious amount of chemistry. Unfortunately for him, Sunderland puts a stop to the sizzling moment with three choice words.

I don’t know if I can wait that long. These two need to get together sooner rather than later.

Dean Fogg Gets his Flirt On

It was awesome to see Dean Fogg get in on the action when it comes to his students recently back from Fillory. It was also awesome to see Dean Fogg get himself a little action when tracking down a former Brakebills teacher. Professor Bigby (Amanda Brooks) taught the now banned subject of battle magic. When the two laid eyes on each other — seemingly for the first time in years — things got a little steamy. For me, it was a great moment. In this episode, we saw a little bit of a lighter side to Fogg. There was his meet (again) cute with Bigby and then later, after they have a spell that should mean doom for The Beast, he orders his students to get drunk in order to deal with the pain they were about to experience.

If the Dean tells you to chug, you chug. ? #TheMagicians pic.twitter.com/e3km2HGWtN

More Rick Worthy on The Magicians, please. And while you’re at it, bring back Professor Bigby. I liked her dynamic with Dean Fogg.

The Magicians airs Wednesdays at 9/8c on Syfy.

Justified “Shot All to Hell”

The Vampire Diaries “Into the Wild”

Moment of Goodness: Miles vs. Monroe, Revolution “Nobody’s Fault But Mine”

Justified “Whistle Past the Graveyard”