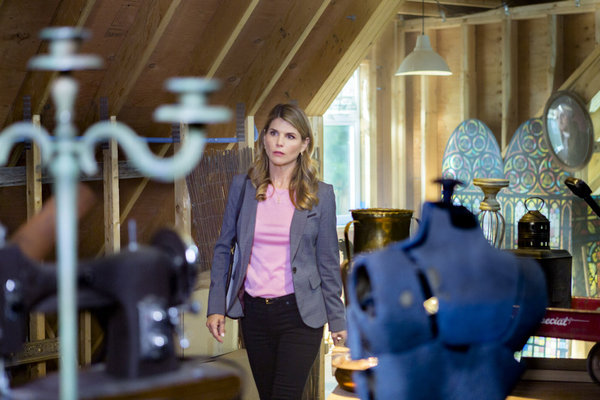 Garage Sale Mystery kicks off 2017 with its seventh installment, The Art of Murder, airing Sunday night on Hallmark Movies & Mysteries. One of the reasons we love this film franchise, aside from its core cast and creative team, is that it regularly taps guest stars we already know and love. This time around, we getÂ three fun, familiar faces in When Calls the Heart‘s Martin Cummins,Â OUaT’s Keegan Connor Tracy,Â and Hallmark regular Susan Hogan, who are all part of my tribe of personal favorites.

Here’s what to expect: While arranging a charity garage sale event, Jennifer (Lori Loughlin)Â finds a body in the attic of a local residence. At first, Jennifer, working alongsideÂ Frank (Kevin Oâ€™Grady), determines that the cause of death was an accidental fall. But when she learns that the victim was trying to call 911, she begins to suspect foul play. Though Frank remains convinced the fatality was an accident, Jennifer decides to investigate on her own, questioning key suspects, including Tina Parsons (Tracy), an art appraiser and close friend of the deceased.

Along with Loughlin and O’Grady, the rest of the cast, including Sarah Strange, Steve Bacic, Eva Bourne,Â and Connor StanhopeÂ all return. Murder She Baked director Kristoffer Tabori (credited here as K.T. Donaldson) steps in to direct for Peter DeLuise, who helmed the first five films and Norma Bailey, who directed the last film. Walter Klenhard has written all seven films.

I’m most happy to have Cummins come play. A screener wasn’t available ahead of time, so I’m not sure which side of the crime he falls on. It’s his first non-Hearties outing for the networks since 2014’s The Christmas Shepherd, so I’ll take him however I get him.Â I’d love to see him in more one-off films for them (please and thank you). The same goes for Tracy. I think this is her first film for the Hallmark family, which surprises me.

The Art of Murder airs Sunday at 9/8c on Hallmark Movies & Mysteries after a daylong marathon of the previous six films, which begins at 9 am/8c. Here’s a sneak peek of Sunday’s premiere: