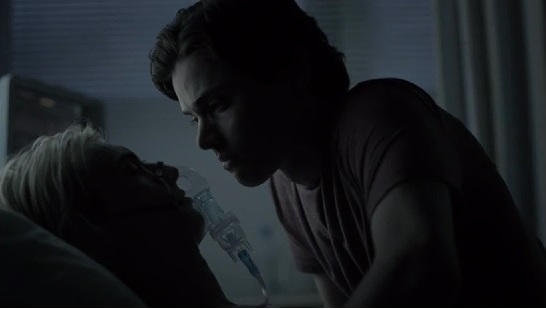 Is everybody OK after Eyewitness built you up and then ripped it all away like a cruel, cruel mistress? I totally feel you, but I promise, it’s so worth the ride. Like I said last week, you’re just going to have to work/sweat/flail/rend garments for it.

So, this week, Kamilah has to deal with the repercussions of her sh!t show of a security detail, but luckily for her, the trigger man was her boss, so he can’t really throw shade at her in a performance review, right?

We know from the preview (which, frankly, I was floored was cut the way it was), that Lukas did in fact survive. That begets a confession from Philip, but it’s not totally smooth sailing from there.

While we’re waiting to see if Lukas wakes up, Philip has heart-to-hearts not only with Gabe, who gets confirmation that what he saw last week is the real deal, but also someone else close to Lukas, who’s surprisingly chill and empathetic, and Anne, whose advice isn’t altogether helpful, even if it’s genuinely heartfelt as she tries to be a parent for what is probably the first time ever.

Our favorite sociopath, Kane, keeps winding his web of deception and destruction around Tivoli, spiraling ever closer to an abyss and commiserating with Helen, who’s terrified of losing him as a kindred soul. Tony also drinks some of that same Kool-Aid about how supercalifragilistics he is.

Helen again puts the case before Gabe and Philip until she finally twigs that she’s potentially mucking up a very good thing and tries to make it right. She delivers a delayed truth-telling to Gabe that explains so much about her behavior, and he responds as the profoundly decent man she knows him to be.

Sidebar: I do love that Gabe is just at the edge of the mother of all meltdowns but never goes all the way there. That’s so much more fascinating than a Defcon 1 freakout, although at this point, I’d say he’s earned one.

Adjacent in the camp of other well-deserved freakouts is Papa Waldenbeck, who actually isn’t losing it, and is instead trying to retain some kind of normalcy in the face of losing his son, which produces a moment of kindness and clarity that’s super important.

It’s a Philkas-light hour in the most straightforward sense of that term, but it’s a fabulous episode for the staunch fans of their relationship as they face another round of internal and external fears.

The performances across the board are so, so good. I really hope USA pushes the cast next summer for Emmy season. Golden Globe nominations are announced Monday and it would be terrific, at the very least, to see Julianne Nicholson recognized. Only one episode left after this one. Strap in, y’all.

FYI — the song that frames the episode is Soren Bryce’s “Forever is Not Enough.”

Aftermath Preview: "Now That We Talk of Dying"