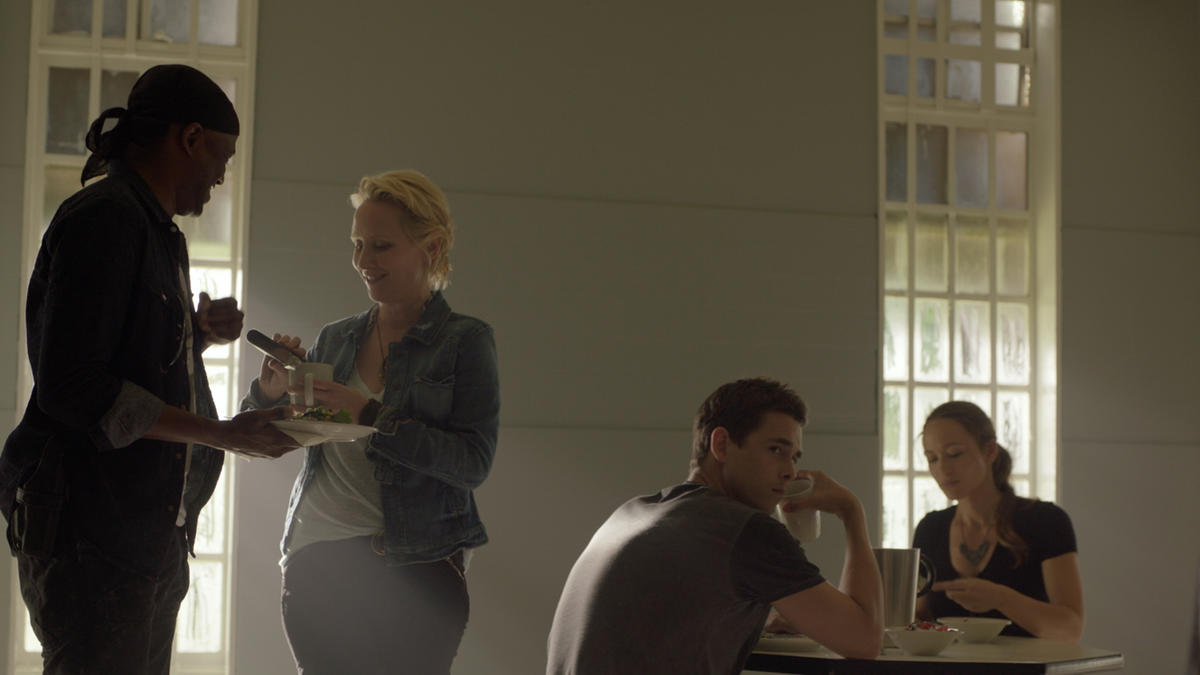 There was a big hello in the latest Aftermath. And an even bigger goodbye.

Well, even though guest star Wayne Brady received a fantastic entrance…on horseback…with a fierce helmet on…all bold and sarcastic and gun-wielding, let’s begin with the big death that came at the end of “A Clatter and a Chatter.” Karen’s sister, Sally, went down thanks to one of Booner’s Air Force pals who was fever sick…which means he was also sick in the head.

Sorry to say, but Aunt Sally definitely had red shirt written all over her but, even so, I was kind of sad to see her go so soon. I think it would have meant even more if she had stuck around a little longer. I wasn’t as invested in her as I could have been. But I’m glad she and Karen made their peace. Sally apologized to her sis for not totally getting what she was all about.

What does this mean for Karen? She’s a pretty hard-edged individual. I really like that about her. She’s tough. She’s fierce. She’s fearless. What will losing her sister mean for her? The entire hour, she heard the call of the banshee which is what happens when there’s about to be a death. She was the only one to hear it. Is this something that’s only going to happen to Karen? Or will others eventually hear the call as well? Is this now a symptom of this new world?

It was good to see Wayne Brady in a much different role than I’ve ever seen him play. You might know him from his days using his genius singing and improv skills on Whose Line is it Anyway?Â Or as current host of the CBS game show, Let’s Make a Deal. Or even from his appearances on the late sometimes great comedy, How I Met Your Mother.

Here he’s Booner, an Air Force friend of Karen’s. He calls her “Booty” which is a shock to Karen’s kids. I don’t think he endears himself to Joshua, considering Booner likes to flirt with Booty (formerly “Beauty”) like there’s no tomorrow. I’m not sure about him just yet. There are some red flags he quickly throws into the mix. He’s crowned himself leader of his particular territory known as The Alamo. He seems to have it made. His people eat. They shower. They hang people who don’t subscribe to his brand of law. In fact, he actually utters the words, “I am the law,” I believe. It’s his way or get hung on the side of the road. That’s brutal. Joshua doesn’t take too kindly to Booner’s maniacal-like methods.

Booner’s not quite The Governor on The Walking Dead. He’s more like The Governor in-the-making. He’s very helpful in this episode. But he’s also very dangerous. I feel like, ultimately, the Copelands aren’t going to be able to trust him and Booner and Booty’s friendship and flirtation will quickly turn into something more toxic and potentially deadly. Looks like Brady’s having fun playing Booner so far, though, especially in that scene at the end where he and his people take care of the feverhead skin walkers with guns…and mines. It was pretty cool. Not going to lie.

I’m a bit torn on the Dana/Martin situation. I like that she’s showing interest in a guy — even though it’s a pretty boy, which, apparently, is so not her type. I like Martin (Madison Smith,Â When Calls the Heart, Supernatural) instantly, but I also want to know how old he is. I know that in a post-apocalyptic world, anything goes. But I feel like he may be too old for Dana. I can’t believe I’m agreeing with Matt. Having said that, I do see some sparks there. They’ve quickly progressed to the kissing phase of things.

For now, I’ll go with Dana/Martin over what Brianna has with Devyn. While I do feel like Brianna’s showing some growth with her feelings for the pioneer village kid — someone she also wouldn’t normally be with — these two are such an odd pairing. She’s taken to this crazy new world pretty well. She has no problems grabbing a gun and using it. Devyn’s used to his sheltered existence. I wonder if he’s going to be able to adjust to the times. So far he’s fighting it. He’s scared of everything. I’m not sure if Brianna is really into him like she says she is or she’s simply talking herself into it because the kid gave up everything to save her.

As far as the supernatural, the group had to contend with Japanese demon vines aka the Jubokko Plant and they now know feverheads can be possessed. My question is: once someone who’s possessed is taken care of — where do these spirits go? They leave the body and fly off to…where? To inhabit another body? Or are they gone for good? They seem to go off somewhere but I wonder if they are able to immediately enter someone else’s body. Not sure what the skin walker rules are so far.

For Love Not Money, Bull Keeps His Promises in "Just Tell the Truth"

Slick Yet Sincere, Bull is “Unambiguous” in Motive and Method

Dancing with the Stars “Season 16 Week 7”

The Strain “The Master”