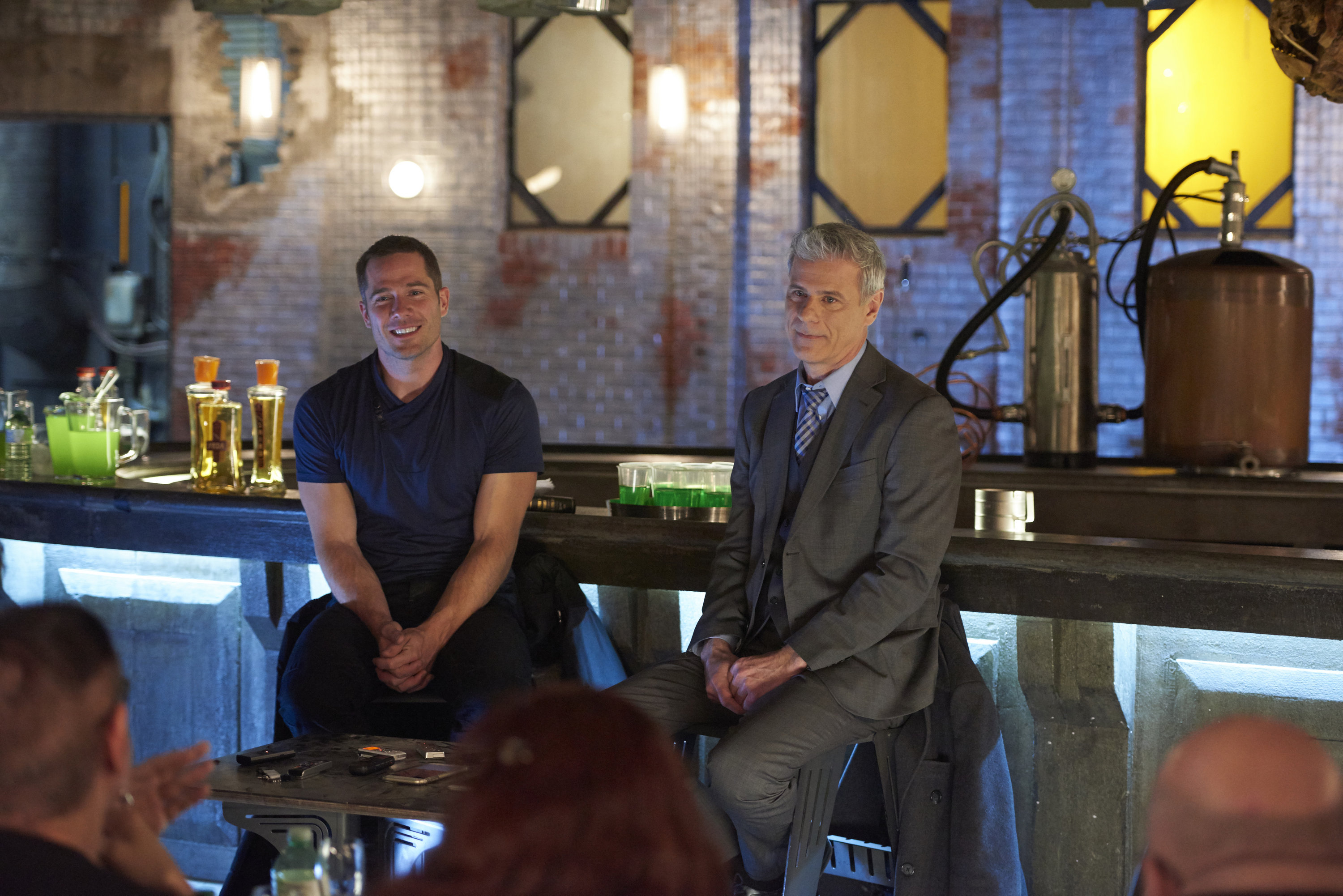 WhenÂ I visited the set of Killjoys in February, castmates were paired for our interviews in interesting ways, which have come to make sense as we get further into the season. Watching tonight’s episode, it was hugely entertaining to see Luke Macfarlane and Rob Stewart swap charactersÂ after witnessing them good-naturedly engage with each other and essentially finish each other’s sentences during our chat,Â while declining to confirm or deny whether they were acting with each other. Cheaters!

Their Freaky Friday-inspiredÂ body swap in “Meet The Parents” occurs courtesy of a green goo uplinkÂ that goesÂ terribly wrong as Khlyen tries to ascertain why D’avin is immune to the Level 6-ing by travelling to see Dear Old Dad Jaqobis. When heÂ taps D’avin’s consciousnessÂ to determine the whereabouts of Mom after Dad is a bust, it goes sideways and he ends up jumping into D’avin’s body, back on Lucy, with Dutch, while D’avin’s consciousnessÂ jumps to Khlyen’s body, which is with his estranged Dad and Fancy. That’s not awkward at all.

What follows is terrifying for Dutch on several levels and unintentionally hilarious for D’avin as he tries to casually “Brah” his way through the ruse until Fancy calls bullshit and zaps him.

On Lucy, Khylen can only hold it together that’s he not actually D’avin for a brief little bit before he has to throw down with the dudes in custody fromÂ a warrant–with all his Level 6 moves intact–and Dutch twigs to it (so, Stewart got to play faking it a little longer than Macfarlane before copping to it, but they both obviously had way too much fun).

Khlyen takes a cut in the abdomen (on D’avin’s body), which Dutch staples shut–shudder.Â He’s immune to pain (even in D’avin’s body, which is interesting), so it’s easier on him than Dutch, but I think D’avin might weigh on that later.

And Khlyen uses the time to clear the air with Dutch, and she with him, when she tells him she’s let go of a lot of her hate for him, but we know that hasn’t lessened her drive to get to the bottom of whatever it is he’s up to, especially where it concerns D’avin and Arkyn.

HeÂ admit to the download he sent out as they evacuated, and she tells him she knows, but he doesn’t tell her what it is, except that it will answer everything (thanks?).Â TheyÂ reach aÂ dÃ©tente of sortsÂ as she tries to shock him and D’avin back to where they each belong, and before he goes (by his own forced hand before he can say too much), he drops the bombÂ that it wasn’t herÂ on Arkyn (CALLED IT!).

Random #Killjoys thought an hour later — are we supposed to think that Dutch has/had a twin?

D’avin gets a new perspective of his own and can finally put to bed all of his ownÂ demons aboutÂ his father, when he realizes, and tells Johnny as much, that their Dad seems so small now.

Johnny’s going to have to sort his ownÂ shit out, too.Â When he comes back to Lucy, he lies to Dutch by omission bout aligning with Pawter to help her on her Qreshi subterfuge. On the one hand, that’s fair (ish)Â since their trip home ended with getting bothÂ of Pawter’sÂ parents killed, but on the other, he keeps it back from Dutch right after she throws her arms around him to welcome him home and tells him he’s her gravity, her touchstone, andÂ pretty much where her sanity and sense of self originate and reside.

That’s so not going to end well.

Before that,Â there was a fun Facetime-esque call between Dutch and Johnny where they hypothetically asked each other for help with their respective predicaments without tipping how dire their actual situations were.Â  If they can retain that bond in the face of whatever is to come, they’ll be OK.

We’re already halfway through the season. Next week’s episode is the one we were on set for, but we were shielded from the naughty bits (DAMMIT).

Killjoys airs at 9/8c Fridays on Syfy. You can rewatch this episode at syfy.com starting Saturday.

Real Sports with Bryant Gumbel Preview: "The Lords of the Rings"

Once Upon a Time “Heart of Gold”

The Night Of “A Dark Crate”

Breaking It All Down, The Originals “Girl in New Orleans”