Real Sports with Bryant Gumbel Preview: “The Lords of the Rings” 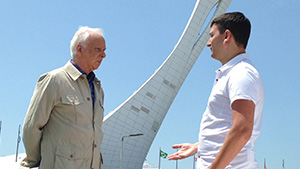 If you, like me, were watching the Democratic National Convention, you may have missed this weekâ€™s Real Sports with Bryant Gumbel. Iâ€™m not really a sports fan, but Iâ€™m always a sucker for investigative journalism. So if Iâ€™m channel surfing and I see that this show is on, Iâ€™ll watch it. But I watched â€œThe Lords of the Rings” the night it aired. Â Why was it appointment TV for me? The entire hour was devoted to the Olympics.

In its twenty-one year history, Real Sports with Bryant Gumbel has never devoted an entire hour to just one story. But there was so much material here and so much story to tell that I get why they did it. But was is it about the International Olympic Committee (IOC) and the Olympic movement that provides so much content?

The Summer OlympicsÂ will commence in less than two weeks. Not only will the world’s elite athletes converge on Rio (if they haven’t already), but millions of fans will go to Rio to watch live or tune in to watch these contests on television. I’ve been hearing for months how unprepared Rio is for the games and how some athletes have decided to skip this year’s contest. Are they truly safe there? Not only is it possible that the police won’t be able to protect them if violence erupts, but Zika and other viruses are a real concern.

While these challenges are obvious, there are some that are deeper and much harder to root out. One of the big problems is with the IOC itself. WhileÂ the IOC claims that “our shared humanity is greater than the forces that divide us,” many of their past members have been exposed for corruption.Â They give great soundbites and their mission statement seems to be one of unity, but some of the countries they’ve given the Olympics to have participated in shocking human rights violations and in quite a few cases, the citizens of the countries where the games were hosted have been leftÂ so much worse off than before the IOC was there.

Bryant Gumbel travels to Norway to discover why and how the IOC has worn out their welcome there and why that countryÂ has lost all interest in hosting the games.

Bernard Goldberg travels to Sochi to investigate how much the city’s upkeep of the Olympic venues is costing them — and ends up in jail for his trouble. Putin put on a big show when the world was watching. And after the games left and Putin felt his position — and Russia’s — had been elevated after so much exposure, he may have been emboldened to invade the Ukraine and ally himself with Syria’s Bashar al-Assad.

Jon FrankelÂ travels to Rio and sees how raw sewage is making its way into water where the Olympic athletes are expected to compete and how many of Rio’s sick are (not) being treated by the local hospitals.

David Scott travels to China and discovers how the IOC continues to turn a blind eye to how citizens were ruthlessly evicted from their homes to make way for Olympic venues. In the run up to the Olympics, journalists were silenced and disappeared over a milk powder scandal that would have tarnished the reputation of the games. When a former member of IOC is questioned about it now, he claims to have been ignorant about it at the time. But now that they know about these abuses, will they be addressed and will anything change?

“The Lords of the Rings” is available on HBO GO, HBO NOW, HBO on Demand and will re-air on HBO multiple times over the next few days. Check your local listings.