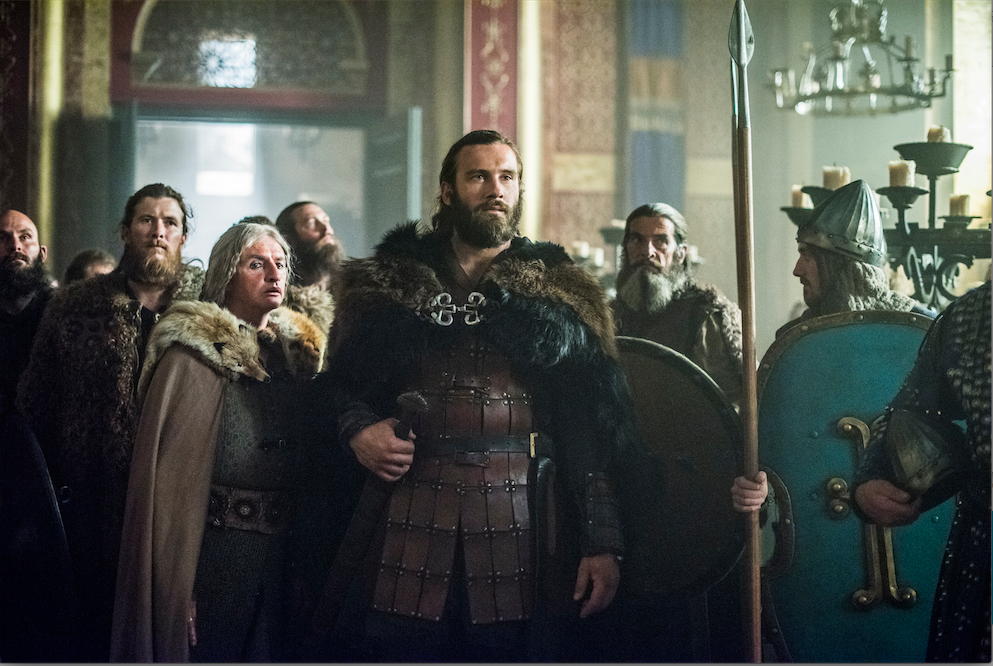 Okay, people. The third season of HISTORY’s Vikings is in the books. Last night’sÂ finale (“The Dead”) is probably my favorite season ender of this show so far.

Ragnar’s trojan horse move was brilliant. Getting baptized before he “dies” and wanting a proper Christian funeral — it gets the Vikings firmly through the gates of Paris, where they are able to do some serious damage, including stabbing the Bishop that baptized him.

But before the Norsemen cart off a “dead” Ragnar, Lagertha, Floki and Rollo say their goodbyes. These scenes are among the most interesting to me.

–Lagertha’s still in love with her ex-husband. Even though she knows he’s newly baptized which would pave his way to be reunited with Athelstan in heaven, sheÂ wantsÂ something else. She hopes Odin will prevent that from happening so the two of them can meet again in Valhalla. This is an understandable response from Lagertha, if you ask me. I would love to see these two together — it doesn’t matter how it happens. (Although, I don’t like Ragnar and Athelstan being separated either)

–Floki’s goodbye gives me a bit of whiplash. I love you, Ragnar. More than anyone! Even Athelstan! No, I hate you. You’re the worst. You betrayed me! This is vintage Floki. But it also expresses how much Ragnar really affects his life. So much so he can’t even be gracious when faced with his king’s death. His friend‘s death. While I wish the show had dealt with Ragnar enacting brutal revenge on Floki over killing Athelstan this season, that scene where the king tells his former friend that he knows he killed Athelstan was menacing goodness. Travis Fimmel is really good at conveying menace. It almost makes me scared for Floki. ALMOST is the key word here.

–Rollo’s goodbye probably disappointed me the most. I really had high hopes that he got over his issues of jealousy. And that he would show some sort of grief in the wake of Ragnar’s death. But sitting at the foot of the coffin, he didn’t exhibit much emotion. His take is who would have thought Ragnar would die first? This means the gods didn’t favor Ragnar after all. Instead, they favor him. It’s quite a realization for Rollo. And by the end of the episode, even though he finds out Ragnar’s death was premature (and a big, massive trick), he’s the one sitting at the table with Emperor Charles. He’s the one being offered Princess Gisla’s hand in marriage. He just needs to hook up with the French and fight against Ragnar and the Vikings when they return to Paris in the spring. Oh Rollo. I’m sorry. Oh Duke Rollo…jealousies never truly die, huh? I want him to be successful in his own right. But not at the expense of Ragnar. Every time I think their issues with each other are over they come back stronger than ever. We’ll see how strong when new episodes resume in 2016.

-Was Ragnar serious about this baptism or was it just for the purposes of getting into Paris? Because he murdered the bishop. But I wouldn’t be surprised if he really wanted to reunite with Athelstan in the afterlife. So color me confused.

-Rollo’s Seer prophesy was pretty much dealt with but is Lagertha’s still up in the air? I, for one, am ecstatic that she made it through this season alive. But I’m still wondering if there was something to what The Seer told her.

-Also, will Lagertha get a chance to get her revenge on that hot usurper, Kalf?

-How scared should Floki be?

-Will Rollo really turn on his brother?

-Was there any consequence to Aslaug sleeping with Odin/Wanderer?

-Will we ever see Wessex again?Â The Vikings owe Aethelwulf and King Ecbert some payback. Plus, there’s the matter of Judith and Athelstan’s child, Alfred.

-I wasn’t sure Ragnar would make it through this season alive, either. How about next season? Because I can totally see him being killed off which would enable his kids to take over.

Speaking of season 4, HISTORY released a teaser that involves Bjorn…and a bear (and that bear isn’t Rollo). Can 2016 start now, please?

Vikings airs on HISTORY and will return in 2016.

When Calls the Heart Season 2 Premiere Preview: "Trials of the Heart"