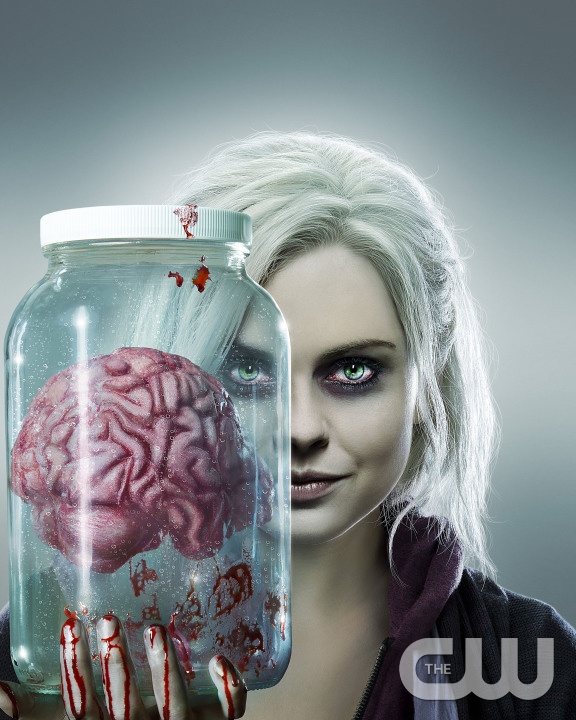 Are you watching the CW’s iZombie yet? No? Well, you need to rectify this matter pronto. Because it’s my newest TV addiction (other than Marvel’s Daredevil). There’s so much to love about it. Even though it’s based on a comic book series, it’s new to me. I really dig the refreshing spin it puts on the zombie phenomenon that’s so hugeÂ these days thanks toÂ AMC’s The Walking Dead.

But don’t think you’re about to get the typical TWDÂ creature.Â The zombie at the heart of this new show struggles to live her sudden undead life. She thinks. She talks. She works. She keeps her monster status a secret from almost everyone in her life, which means her family, friends and her former fiancÃ©eÂ struggle with this change in reality as much as she does. They can only attribute her personality adjustment to the traumatic events of the party she attended. And as long as she continues to eat brains she’ll stay human…ish.

Rose McIver is fantastic as Liv Moore. One day Liv’s a promising doctor; the next day she’s a zombie coroner. The color has been sucked out of her life in more ways than one. Her hair is now white, her skin more pale than ever before. AndÂ she doesn’t feel the same excitement or get the same enjoyment out of life, either. Her constant need for brains makes her new job the perfect way to give her what she needs…with an added benefit. Whenever she digests the brain matter of the person lying on the slab in front of her — she takes on their personality. And that’s how she finds a new purpose…she helps solve crimes.

So now herÂ unstable universe becomes about helping Clive the cop bring justice to victims — in a psychic capacity, of course. Clive has no idea what she really is. Ravi, her coworker knows, thankfully. So Liv does have someone she can confide in and, in turn, he’s doing his best to find a cure so she can get her life back. There’s also a dangerous element that takes the form of Blaine, the guy who turned her into the zombie in the first place. We don’t know exactly how dangerous he is yet…but Liv certainly is going to need to keep an eye on him.

I recently hit WonderCon 2015 and got the chance to take part in interviews with executive producers Rob Thomas and Diane Ruggiero-Wright as well as iZombie cast members McIver, Malcolm Goodwin, David Anders and Robert Buckley. They talked the success of the series; their characters as season one continues; and those not-so-delicious “brains” Liv has to eat on a weekly basis. And I love that Anders refers toÂ iZombieÂ as a “ZomComRomDram.” Not quite sure how to spell that but it’s highly hashtaggable, don’t you think?

iZombie airs Tuesdays at 9/8c on the CW.