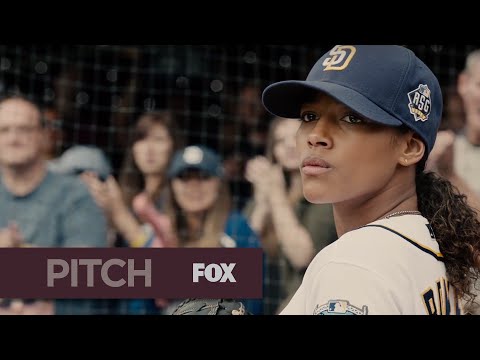 Although I’m not really a sports fan in real life, I will take a well-told and compelling sports drama any day. I mean, I’m one of the people who watched and loved ESPN’s Playmakers. Remember that? It was so good. I also watched and loved NBC’s Friday Night Lights. Hmmm. I’m noticing a pattern here. I think the reason I love football so much is because part of my formative years were spent in the South, where every single person spends every Friday night during the season at the high school stadium. Aren’t a football fan? Like that matters.

I’ve been to a few baseball games, but I don’t follow any particular team and would never call myself a fan. The reason I’m so excited about Pitch is because it’s something new. It elevates the genre with some great built-in conflict.Â  Don’t get me wrong. I’m not saying I wouldn’t watch any other sports drama. But the potential for conflict on so many fronts here makes this a must-watch show. But am I excited because a woman’s at the center of this show? Absolutely.

We’ve got a player who’s the first woman to ever be recruited by a professional sports team. That’s huge. I know there are so many talented women in sports in real life and hardly any of them get their due. But to put this woman into an arena that’s truly male dominated like major league baseball? I literally can’t wait to see that.

You know there’s gonna be drama for so many reasons. From the teaser alone, we can see she’ll have trouble with at least one of her teammates who feels like his job’s being taken away in the name of feminism. Or diversity. Or whatever. And what about all the other people around her? There’s a lot to lose if this doesn’t go well. Can you imagine the kind of pressure that would put on an athlete? It’s gotta be so difficult to be the first. But I can’t wait to see how this plays out.

From executive producers Dan Fogelman and Rick Singer, Pitch is the dramatic and inspirational story of a young pitcher who becomes the first woman to play Major League Baseball. A beautiful, tough and gifted athlete, Ginny Baker (Kylie Bunbury) is vaulted into instant fame when sheâ€™s called up by the San Diego Padres to make her Major League debut. Like any rookie, Ginny must prove herself to her teammates. Foremost among them is Mike Lawson (Mark-Paul Gosselaar), the teamâ€™s ruggedly handsome star catcher. Thereâ€™s instant chemistry between them, although neither dares admit it. After all, Mike is captain of the team and a few of his players donâ€™t even want Ginny on the field. One of the players watching Ginnyâ€™s back is center fielder Blip Sanders (Mo McRae), an old friend from the minor leagues. Guiding her is her agent/confidante Amelia Slater (Ali Larter). Amelia saw Ginnyâ€™s star potential early on and left her previous job as a Hollywood publicist to concentrate on the young phenom. Although groomed for this moment by her demanding father, Bill Baker (guest star Michael Beach), the end of Ginnyâ€™s improbable journey is the beginning of an almost impossible one: representing her gender as she embarks on a successful baseball career under the glare of the white-hot media spotlight. Itâ€™s a goal hard enough for anyone to achieve â€“ except this player is also a woman, who happens to be the most important historical figure in sports since Jackie Robinson. This season, Ginny Baker will be the other woman trying to break into one of the oldest, most exclusive menâ€™s clubs in the country.

Pitch premieres this fall on FOX.

Dancing with the Stars "Season 22 Week 9" aka the Semifinals