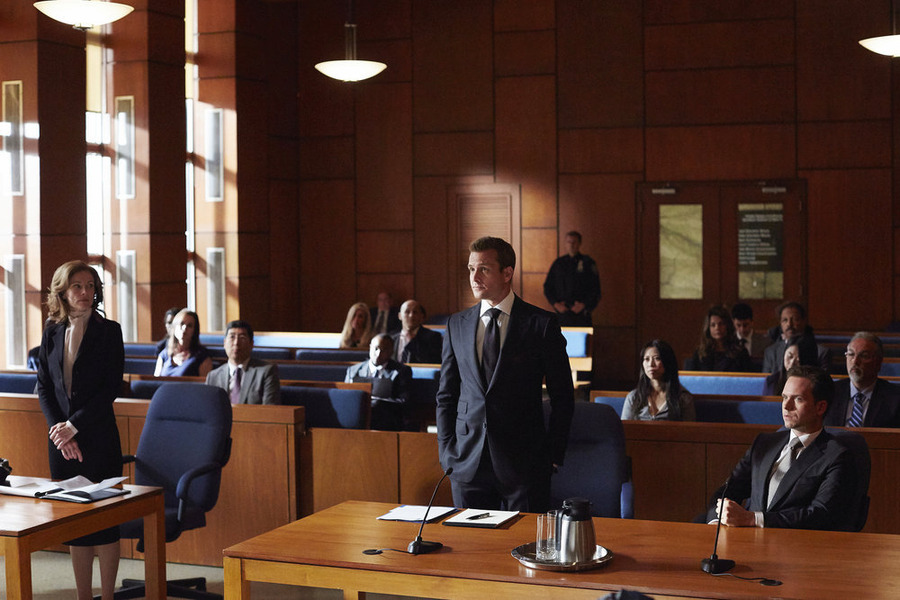 As Suits fans know, Mike’s in a world of trouble in the final episodes of Season 5. He’s been arrested for fraud — something we know he’s guilty of — and he’s facing jail time. Making sure he doesn’t weasel out of this predicament is Assistant U.S. Attorney Anita Gibbs. In last week’s “Blowback,” she proved a tough foe. Gibbs’ presence will face a challenge — not only for Mike but the major players at Pearson Specter Litt.

We recently talked to the actress who portrays Anita Gibbs. Leslie Hope tells us what we need to know about her character — flaws and all – and compares the rhythm of Suits to “double dutch.” She also teases what’s ahead for her NCIS character as well as shares her thoughts on Michael Weatherly leaving the CBS series.

TV GOODNESS: Talk about Anita Gibbs. First of all, you work onÂ NCIS and on Suits, you’re playing a character with the last name Gibbs.

LESLIE: If I could only be related to Mark Harmon in some way. I’d be a happier woman. It’s true. His character’s named Gibbs. And mine is, too. In fact, I forgot to rub that in because I just did another episode of NCIS and I forgot to rub it in Mark Harmon’s face that I was playing a character with the same name.

TV GOODNESS: Talk about Anita Gibbs — what kind of lawyer is she?

LESLIE: As a character I think she’s smart and driven and determined and relentless and really believes that she’s on the side of right and there is a right and wrong. And there is a good and bad and that her determination in taking these guys down is not just to be vindictive or a two-dimensional villain, but really she feels like she’s doing the right thing.

TV GOODNESS: What are her flaws?

LESLIE: I would say ego. And I would say she gets caught sometimes in engaging — particularly with Gabriel’s character, with Harvey — because she can’t just resist a good argument and a good fight. And he pulls her in a couple of times.

LESLIE: He can do that. I give it back to him. But he can give it out.

TV GOODNESS: What’s it like to be a part of the show?

LESLIE: Well, it’s a show that’s, obviously, successful but incredibly well run so they’re in their own rhythm. A show like that, I describe it, it’s like they’re playing double dutch, right? And you just gotta kind of jump into their rhythm and not trip it up. Because it’s going and the last thing you want as a guest is to make a problem.

TV GOODNESS: So does Anita end up clashing with everybody on Mike’s side?

TV GOODNESS: Is there anybody on her side?

LESLIE: Zero. I’d like to think she’s got somebody at home who loves her but we don’t see it on the show.

TV GOODNESS: NCIS. Can you talk about Michael Weatherly leaving the show? What are your thoughts?

LESLIE: I like Weatherly very much as a person. I’ve known him forever. We both came up at the same time. I’m sorry for the show because I think he’s a wonderful part of the show. And happy for him for whatever adventure he’s going to go on. I was talking to my boss over at NCIS about that saying, hey, they might ask me. What can I tell them? And he said you can tell them that the fans can expect the best as always from NCIS and until the episodes are delivered, he’s not telling me anything else. (laughter)

TV GOODNESS: What can you tease about your next episode?

LESLIE: I just came off it. As you know, I play the Secretary of the Navy. I have a personal story arc in this one where my daughter goes missing. It’s not only an emotional episode but where I really need Mark Harmon’s character — Gibbs’ help on a personal level and professional level. ‘Cause I’m not handling it very well, professionally, because I’m so personally distraught.

TV GOODNESS: Was that amazing to play?

LESLIE: Yeah, it was pretty great. You know, Harmon’s somebody I’ve known for a long time, too, and it’s just such a joy to be on a set with Mark Harmon.