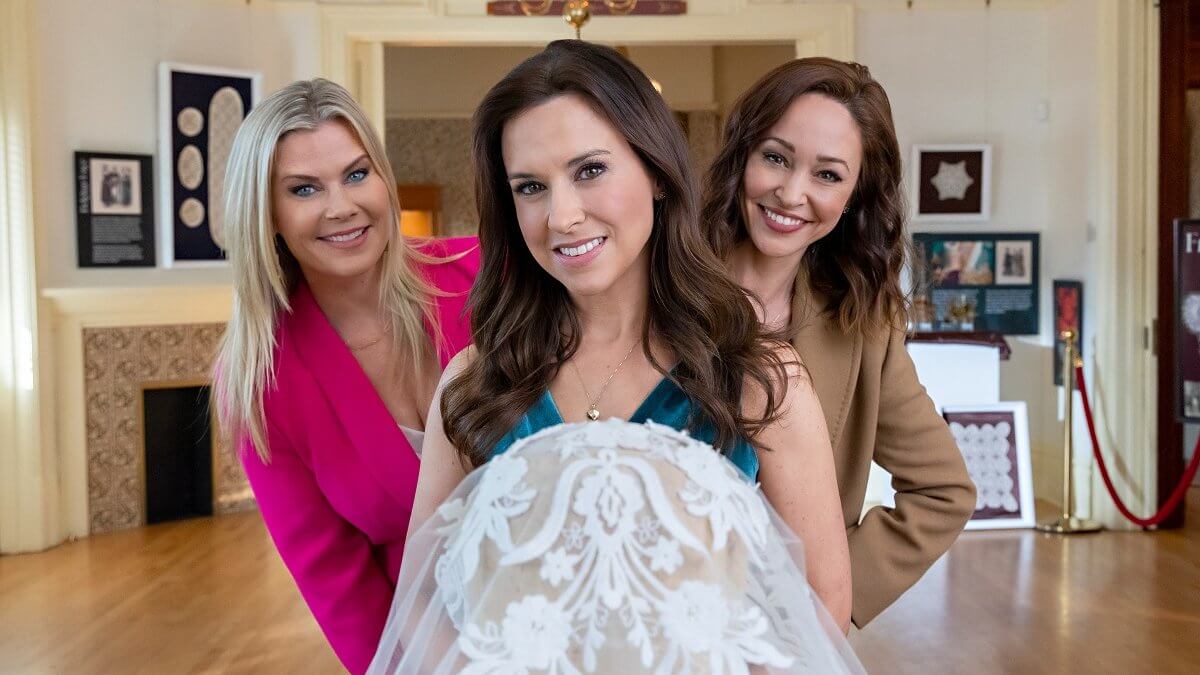 In somewhat record time, Hallmark Channel is following up last January’s experimental overlapping The Wedding Veil trilogy with a brand new trilogy, rolling out each Saturday at 8 pm ET beginning this week. Each will also air live on Peacock, and on W Network in Canada. Here’s what to expect!

Avery (Lacey Chabert) and her husband Peter (Kevin McGarry) are in the midst of renovating their “new” old house, which is a bigger undertaking than they anticipated. Avery has some exciting news to share with him but is waiting for just the right moment. Meanwhile, Avery’s mother-in-law Grace (Karen Kruper, Color My World with Love) reconnects with a former beau, and Peter has concerns.

Between that, the pitfalls of remodeling, and the politics of a new boss at the museum, Avery is lucky to have Emma (Autumn Reeser) and Tracy (Alison Sweeney), who offer support from afar as well as in person, when they decide a video chat won’t suffice. When newlywed Tracy returns the antique wedding veil to Emma, the friends may find that they haven’t seen the last of its magic. Peter Benson directed from a script by Judith Berg & Sandra Berg and Karen Berger, inspired by the book, There Goes the Bride, by Lori Wilde.

Emma is teaching and working hard to prove she can step into the department chair role, as Paolo’s (Paolo Bernardini) lace shop is a about to open. On track for her life plan, Emma feels strongly that things should fall into place before she and Paolo grow their family. As they navigate the timing around their busy work schedules, Emma bumps heads with the current chair of her department (Lynda Boyd) and starts questioning her life choices. With support from Paolo, and perhaps a little help from the veil, will Emma find the courage to stop planning her life and start living it? Terry Ingram directs a script by Betsy Morris

Tracy (Sweeney) is now head of the auction house, and Nick’s (Victor Webster) restaurant is such a success that he’s looking at expanding, however their combined success leave little time to see each other. The couple agree to make time for their long overdue honeymoon and head to Greece to relax, sight see, set work aside, and focus on each other.

When a travel delay costs the couple their hotel room, they get the opportunity to stay on a remote island nearby. Is it possible the veil is once again working its magic and bringing them exactly where they need to be? Ron Oliver directs Karen Berger’s script.