Previewing Fly Away With Me 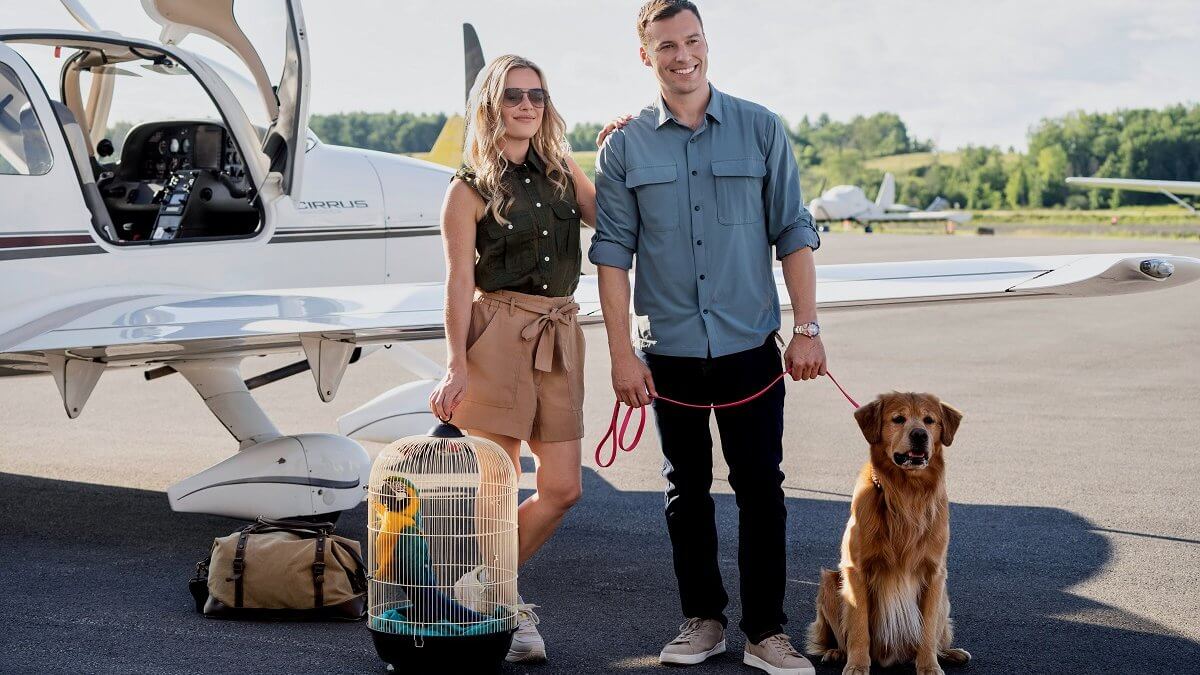 Hallmark regular Natalie Hall brings Burden of Proof and Rookie Blue alumnus Peter Mooney into the fold Saturday night with the premiere of Fly Away With Me, a romcom about two neighbors who conspire to conceal their respective pets in their no-pets-allowed condo building.

Angie works in advertising and quietly dreams of a career as a screenwriter, but her more immediate dream is a place of her own. Despite her love for her BFF Beth (Kathryn Kohut), she’s tired of crashing on her couch. When she wins the lottery for an open condo, she leaps at the chance, and has no issue with the building’s very firm no-pets policy, until a lost and injured parrot, who introduces himself as Gil, makes himself her roommate on the day she moves in.

Initially driven to immediately find his owner and move him along, she comes to love him. Then she has a series of awkward conversations with Ted, the flight traffic controller/wannabe pilot across the hall, until she realizes the source of the awkward is Zoe, his sister’s shaggy retriever, whom he is concealing in his condo.

Once they each realize that have something to hide, they become fast friends, bonded by their affection for their secret roommates and the thrill of dodging “condo cop” Gineen (Melinda Michael), whose dad owns the building and who is also kind of sweet on Ted. Angie has her own undesirable residual entanglement with ex-boyfriend and boss, Kyle (Joseph Kathrein). Luckily, they have an ally in their subterfuge in doorman, Louis (Paul Constable).

While Kyle would like Angie to place Gil somewhere else and get back to being devoted to her job, Ted joins her in the search to find out where Gil belongs. Pretty soon, the answer to that is obvious. It’s a fun, sometime-slapstick Frasier-esque comedy of avoidance and secrets written by frequent Hallmarkie Barbara Kymlicka and directed by Feeling Butterflies‘ Marita Grabiak (who teamed up on an earlier Mooney romcom, Betting on the Bride, which is streaming on Prime Video).

Hall and Mooney have a good time with the animals and each other, and I’m glad to see him come play. Next up, let’s please put him in a Hallmark title opposite Killjoys and Good Witch‘s Sarah Power, his real-life wife, who joined him in a fun wink-nod in the final season of Burden of Truth.

Fly Away With Me premieres Saturday at 8 pm/7c on Hallmark Channel in the US and 8 pm e/p on W Network in Canada. Here are a few sneaks peeks.