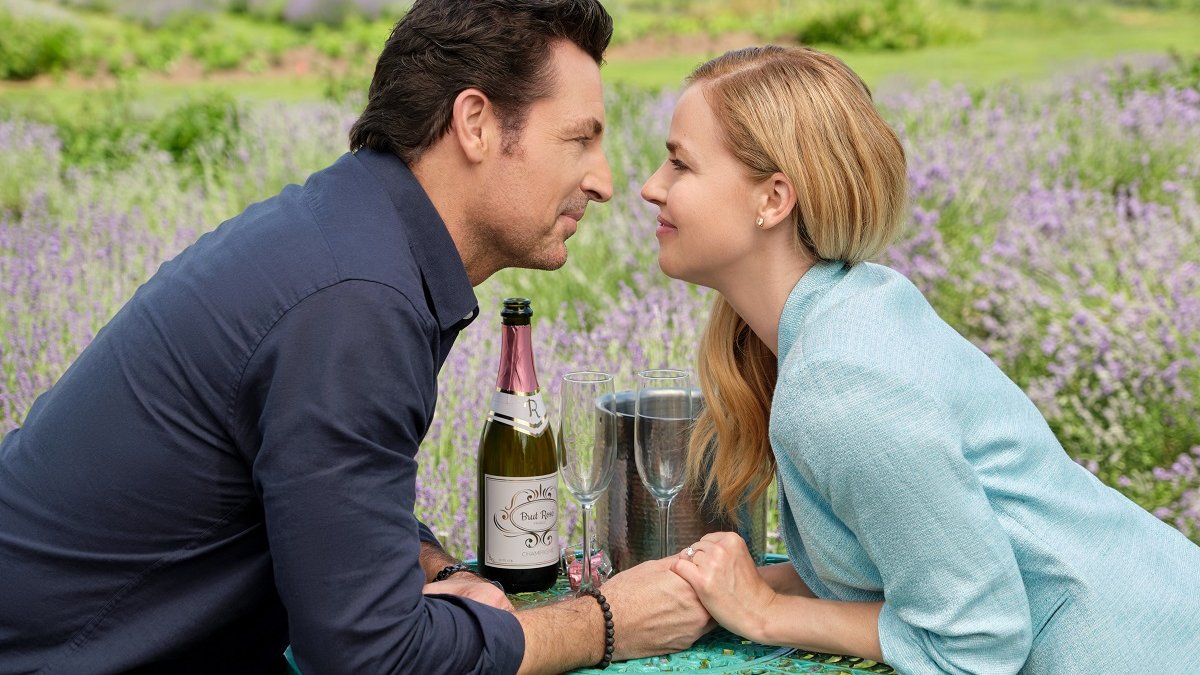 This Saturday on Hallmark Channel and W Network, Amanda Schull and Brennan Elliott star in Marry Go Round, a romance about a long-lost love rekindled under the unlikeliest of circumstances. Abby is on the eve of her Parisian wedding to Edward (Zak Santiago), when she finds out that she’s still married to Luke (Elliott), her high school sweetheart, despite believing herself divorced since he walked out on her two decades earlier.

When she heads home to expedite the paperwork, she’s knocked for an additional loop when she comes face to face with Luke, who, for reasons that are never fully articulated, won’t sign the paperwork. Galled, angry, hurt, and a thousand other things, she’s forced to stay in town over the weekend in the hopes he will grant the divorce on Monday.

Once she spends those few days back in her hometown, in her childhood home, in proximity to him and an ocean of memories, the emotional whirlwind is no less severe, but it does start to soften, and she comes to understand that there was a reason why he did what he did all those years ago. I spoke with Schull last week about the project.

She loved the story, written by Robert Tate Miller, and was right there with us on the Sophie’s Choice of it all, given that Santiago played her perfectly lovely fiance and Elliott played her first love. “I talked to both the guys and of course David Weaver, our director, prior to filming, saying, we need to make sure that she’s not a horrible, evil villain for doing what she does,” she shares.

The film has a more serious tone, and Schull enjoyed the foray outside the Christmas realm. “I don’t mind a good old, seasonal romcom, although Project Christmas Wish had a fair share of drama, but this one, when I read it, was more meat and potatoes than you’d sometimes get from a seasonal romcom. To have a secret of this magnitude that could do such emotional damage to somebody is intense,” she explains.

“For someone to think that their soulmate just up and left one morning out of nowhere, and that’s the baggage that she’s been carrying for two decades. That’s tough. And that’s very hurtful. And I don’t know that any amount of Christmas cheer would necessarily turn that around, so I think maybe it’s important that it wasn’t a holiday story.”

Schull enjoyed capturing the emotional and physical unraveling of her character as she sinks back into the familiar skin of who she used to be. “[The abandonment] formed who she was. When we first meet her, she’s very buttoned up. She sheltered herself a little bit. She built these walls to protect herself because of the damage that was delivered to her earlier. And she became an executive. Her hair is pulled back and she speaks quickly and she walks quickly and she’s more tightly wound,” she points out.

“And then when she starts to fall into her old life, everything loosens and that’s where she’s supposed to be. That’s where it’s comfortable. And that’s the life she was meant to have. Edward is the safe choice. He’s done nothing wrong. He’s done everything right, but Luke is [her person].”

One of the ways Abby falls back into her old life is taking out her her old bicycle, something Schull had a ball with. “I’m not a seasoned bike rider. And the very first scene I did was the garage door coming up and climbing onto the bike. And then every opportunity I had from then on, I was so excited to ride that stinking bicycle,” she laughs.

She get to bring her son to work for a very special day of filming. “He got to come to set for the first time. And they let him ride the carousel because there are these little, teeny tiny horses,” she recalls.

“And it was so beautiful and he and my husband were in the background of one of the shots going around. I don’t think they made the final cut, but that particular scene holds a very special place in my heart. It wasn’t necessarily the scene itself, but the memory is probably going to be with me forever. The fact that they let him do that was a real gift.”

Marry Go Round premieres Saturday at 8 pm/7c on Hallmark Channel in the U.S. and W Network in Canada. Here are a couple of sneak peeks.

We Need To Know: When Will Artie and Tina be Reunited on Glee?