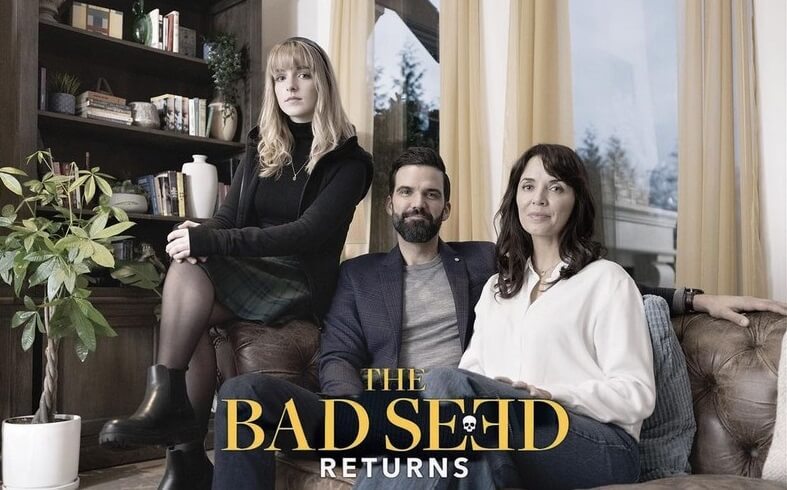 Monday night on Lifetime, McKenna Grace is back as the dastardly Emma in The Bad Seed Returns. And this time, she’s not only onscreen, she also produced with her parents, Crystal and Ross Burge, and co-wrote it with her dad and Barbara Marshall. Louise Archambault directs. In the new film, Emma is now in high school, navigating the mean girls scene (they have no idea) and living with her aunt Angela (Michelle Morgan) and uncle Robert (Benjamin Ayres), who are in for the rudest of awakenings about their niece.

When I spoke with Ayres this spring about Color My World with Love, we also chatted about jumping into the horror world, and he was wowed by Grace. “First of all. How impressive [is she]. I basically got a call on a Thursday, and II didn’t quite know the Rob Lowe reboot, and then I kinda watched that, and thought it was cool, “ he recalls.

“And then I discovered McKenna Grace wrote the script with her dad, Ross. It all happened fast. Sunday I was flying to Vancouver and then Tuesday, we’re doing a read through and McKenna comes in and she’s just a kid, this very impressive 14-year-old who wrote the script, and we sit down and we do the reading of it.”

“Afterward she told me to check out the new Ghostbusters. I happened to be staying across the street from a theater that was showing it and that night I went and watched it, and I thought, she’s not in it, she’s the lead of it. It’s her movie.”

“She’d also said, ‘Make sure you stick around to the end because my song is in it.’ I thought, “Oh my God.’ She’s just so impressive. It’s amazing how different she is in person than the character she plays. Obviously she’s just an awesome fun young teenager and I’ve got two daughters, so I admired and respected and loved watching [who they might be in the future], excelling at something that they love so much and were passionate about.”

“Ross is an orthopedic surgeon. With the pandemic, he wasn’t working. And they thought, ‘Well, why don’t we try to write a script?’ And I think they wrote a couple and this was one of them. [They revisited] some of the characters McKenna played [and realized] they could expand on [this one].”

While the initial sequel script was much darker, the first film’s producer, Mark Wolper, suggested some slight nuance changes and taking it back to Lifetime. “And Lifetime jumped all over it. It’s still super dark. I think it was just really much more horror [in the first drafts],” Ayres explains.

Ayres was thrilled to switch gears and play something darker, and enjoyed the behind-the-scenes-overlap with his Hallmark work. “I loved it. I love getting to do Hallmark movies, but I’m an actor and getting to do something different was great [while] the experience in itself [was familiar]. I was in Vancouver, all of the outside elements are exactly the same [as Hallmark],” he points out.

“I even knew all the crew. In fact, most of that crew also did Color My World with Love. It just felt so interesting. From outside, you could have looked at [us] and thought this was a Hallmark movie, but then once you looked behind the monitors, you could just tell the angles that they’re shooting and the way it’s been lit [were different].”