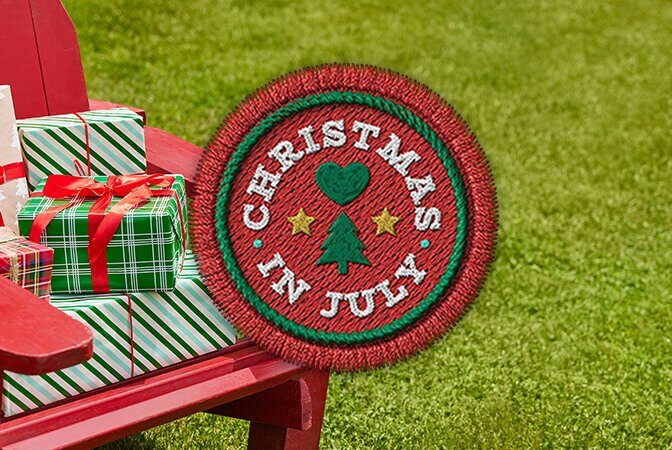 Just in time for the scorching days of summer, take a respite in Hallmark Channel’s annual Christmas in July programming, which brings back all your favorites, and this year includes three original premieres (and a cute Christmas in July key art campaign of a camp badge). The first film premieres tonight on Hallmark Channel and W Network in Canada, and the next two will premiere on the 16th and the 23rd. Here’s the skinny on each.

Tapping into the success of the Time for Me to Come Home for Christmas franchise spawned by the Blake Shelton Christmas hit, Hallmark Channel turns to an Amy Grant and David Foster holiday song and pairs When Calls the Heart co-stars and real-life sweethearts Kayla Wallace and Kevin McGarry in My Grown-Up Christmas List, premiering July 9th at 8 pm/7c.

Last onscreen together this spring in Feeling Butterflies, here Wallace and McGarry play Taylor, a successful journalist who has returned home after her mom’s passing a few years prior to help her grandfather with his Christmas store, and Luke, an active duty service member home to spend the holidays with his family.

The film follows the special bond of friendship and then romance that grows between them over the course of several Christmases spent together and apart until they finally decide to they work on making the most important wish on their Christmas list come true–-to spend every Christmas together for the rest of their lives. Andrew Cymek directed from a script by Bryar Freed and Shawn Riopelle. Here are a couple of sneak peeks.

Leaning all the way into Christmas in July, Campfire Christmas premieres July 16th at 8 pm/7c and stars Killjoys alum and NCIS: Hawai’i star Tori Anderson, Corbin Bleu, Jeffrey Bowyer-Chapman, Caitlin Stryker, Matt Hamilton, and Alec Santos as a group of adult friends who reunite at the camp where they first met as children when Peyton’s (Anderson) parents decide to retire and sell it.

But first, they want to host one final Christmas in July celebration that was a beloved camp tradition, for all their alumni and their families. As the old friends spend time together, they reconnect, reminisce, and reconsider the paths their lives have taken. David I. Strasser directed from a script by Anna White. Here’s a sneak peek.

Christmas in Toyland, premiering July 23rd at 8 pm/7c, stars Vanessa Lengies as Charlie, a toy store data analyst who attempts to save hundreds of jobs at the toy store owned by Tony (Jesse Hutch) and help keep the in-store experience alive right before Christmas. Bill Corcoran directs a script by Courtney McAllister and Kate Pragnell. Here’s a sneak peek.

Click here for the full line up of movies, and visit our TV Movie Goodness section to search for previews and interviews–we’ve covered several of the holiday films over the years.

Y: The Last Man “My Mother Saw a Monkey” Preview