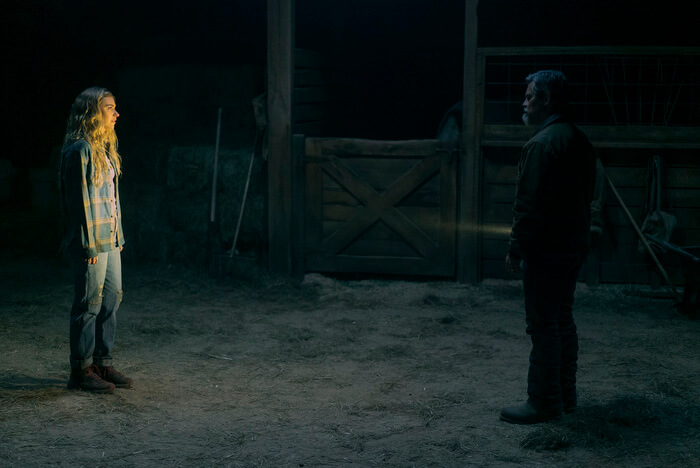 Outer Range, which drops its first two episodes this Friday on Prime Video, takes the Western family drama for a genre spin, following the slow-burn devolution of the two families that come undone when something possibly wicked their way comes after an otherworldly, seemingly bottomless abyss opens up on the outskirts of the Abbott family’s Wyoming cattle ranch.

The Abbotts, headed up by Royal (Josh Brolin) and Cecelia (Lili Taylor), have already been beset my mysteries and sadness, still reeling from the sudden disappearance of their daughter-in-law, Rebecca. Granddaughter Amy (Olive Abercrombie) is acclimating, grounded by Royal and Cecelia and her father, Perry (Tom Pelphrey) and uncle, Rhett (Lewis Pullman). In a house full of love that lies beneath a simmering uneasiness, they’re getting by.

When the cattle headcount starts shrinking, Royal goes looking for them and discovers that an enormous, perfect black hole has opened up in his west pasture. Its appearance coincides with the arrival of a drifter, Autumn (Imogen Poots), who asks to camp on their property but is also keenly interested in and drawn to aspects of the family and Royal that she can’t sufficiently articulate.

The adjacent ranch belongs to the very wealthy Tillersons. The patriarch is the physically and mentally unwell Wayne (Will Patton), who lives with his sons, Trevor (Matt Lauria), Luke (Shaun Sipos), and Billy (Noah Reid) in an outsize home with all the trappings. They’re not model neighbors, angling to argue about longstanding property lines, which feeds a feud between each family’s sons.

In town, the deputy sheriff (and acting sheriff), Joy (Coroner‘s Tamara Podemski), is running for the formal seat and navigating the prejudices of being a Native American and having a wife, Martha (MorningStar Hawk) and daughter, Rose (Ofelia Garcia) in a very conservative, and predominately white, community.

Threaded with touches of magical realism, the fantastic, the macabre, and the absurd, the series movies between a grim family drama, suspense, bursts of violence, and dark comedy as the extremely tightly wound Royal tries to retain a grip on his family while also keeping them at arm’s length about what he found. His secret, one of many, seeds a series of secrets across the family, which are then compounded by a violent exchange and subsequent death that turn the Abbotts and Tillersons against each other and themselves.

The thematically and often literally dark series filmed on location in New Mexico and looks amazing. First-time Brian Watkins created and executive produced and wrote much of the season. I love the cast assembled for this, including the healthy #CdnTV representation in Podemski, Sipos, and Reid as three of the leads in the ensemble.

It’s a meandering tale that weaves together family, faith, guilt, and forgiveness alongside more existential questions about the concepts of time and individual purpose. The weight of all those commingling themes sometimes feels like a lot, so the degree to which this will be your jam will vary.

Top of the Lake Preview: Episode 3