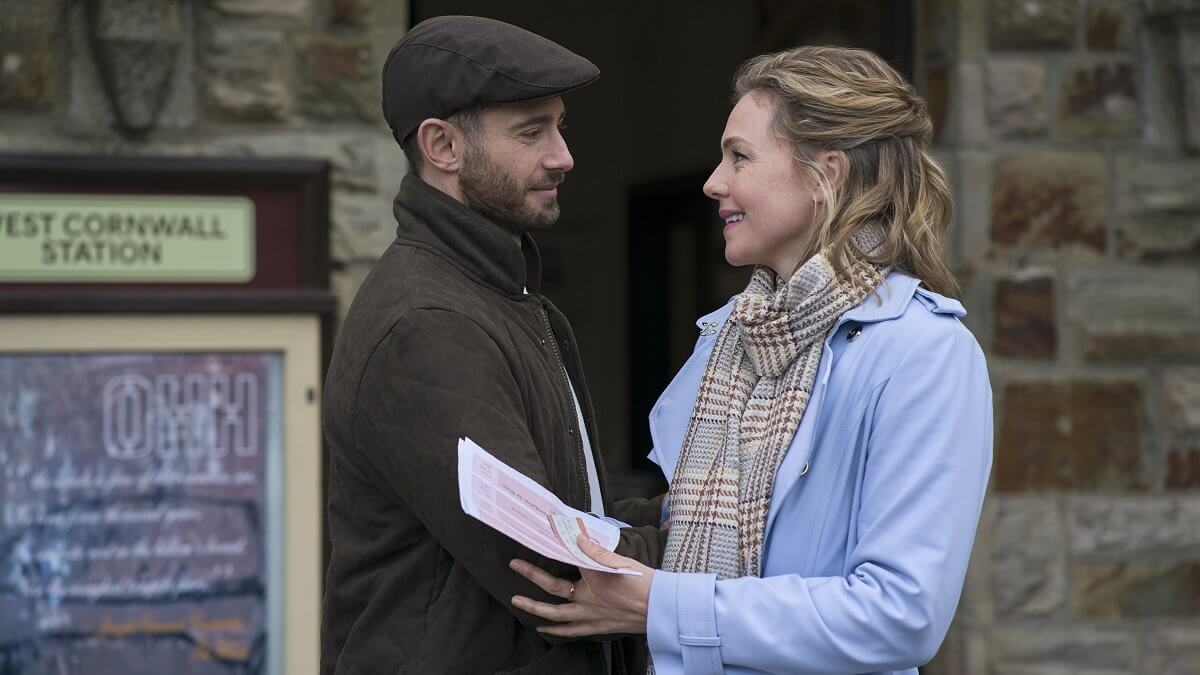 Eloise Mumford and Julian Morris head to Cornwall Sunday night on Hallmark Movies & Mysteries for The Presence of Love, a really lovely, poignant film about a woman returning to a home she never knew, and a family beginning to heal.

It’s also a refreshingly honest take on mental health and learning disorders–two Hallmark firsts, if I’m not mistaken. And if I am, hit me up in the comments!

Mumford plays Jocelyn (Joss), a literature professor filling in for a colleague and angling for a tenured, permanent role. She finds that threatened when she gets feedback from her mentor that her paper lacked a certain something. The good news is she has two weeks to turn it around.

That’s the first time we see Joss have a panic attack as she fixates on the “not good enough” portion of the conversation rather than the “there’s time to fix it” resolution. Her best friend, Gwen (Amanda Blake), steps in with a potential solution–a getaway to Cornwall, England, courtesy of Joss’s late mother, Carol.

Carol had left instructions for the trip to be revealed at Joss’s 35th birthday, which is coming up, and it gives her a sabbatical opportunity to step away from teaching for two weeks and focus on her paper. So off she goes.

When Joss arrives, we learn that the bed and breakfast is actually the mill house on the farm that was Carol’s childhood home. It’s now the home for single father Daniel (Morris) and his daughter Tegan (Amy Sharp) and mother Merryn (Samantha Bond), who are struggling to find their footing running a sheep farm.

Daniel has his eye on diversifying by adding wind turbines via his best friend, Felix (Anand Desai-Barochia), but Merryn is having none of it. The already reserved Joss is rattled a bit by the ancillary brusqueness directed her way but the women find common ground around Tegan. Joss spends time with her, as a distraction from her deadline and because she wants to, and recognizes there’s a good reason Tegan can’t finish her own assignment.

The news is at first received badly by Daniel and Merryn until they appreciate that Joss saw something they didn’t. And that cracks open other things left unsaid between the mother and son. Daniel and Joss also start to connect over their respective losses and roads not taken and consider which roads they should follow now.

We see Joss face her panic a few more times, and openly discuss it. And there’s a touch of the fantastic as she gets glimpses of her mother as a young woman just when she needs a little guidance here and there. It’s a beautiful, warm film and the vulnerability on display is a welcome part of the storytelling.

Mumford and Morris are really good together, as are Sharp and Bond and the whole quartet when they’re together. The countryside and seaside vistas don’t hurt, either. Maclain Nelson directed from a script by Nicole Baxter. Frequent Hallmark director Clare Niederpruem is one the producers.

The Presence of Love premieres Sunday at 9 pm/8c on Hallmark Movies and Mysteries. Here’s a sneak peek.

Previewing From on EPIX: "Silhouettes"