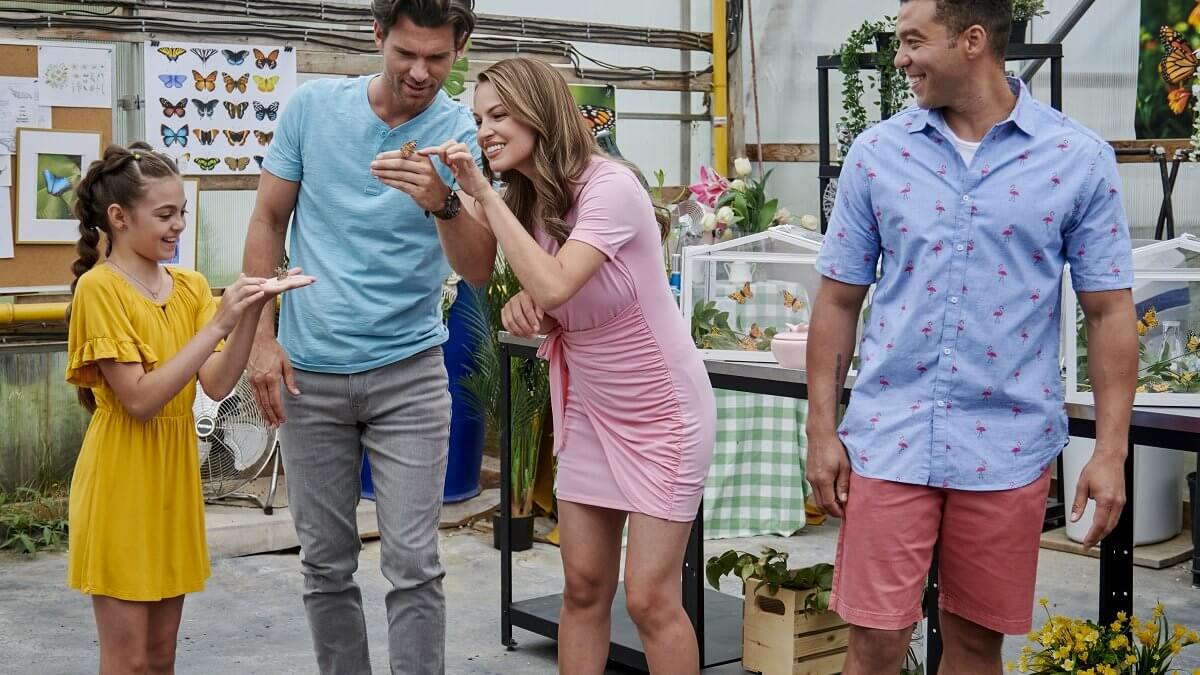 Saturday on Hallmark Channel, When Calls the Heart co-stars Kayla Wallace and Kevin McGarry get a jump on spring in Feeling Butterflies, which technically is not part of the Spring Into Love set of premieres, but we’ll roll with it. It’s also a fun double feature weekend for the Hearties fans with the new season of When Calls the Heart back on Sundays.

Wallace plays Emily Mariposa, a lepidopterist (butterfly expert) and conservationist who, along with her partner and BFF Jodi (Ish Morris), raises butterflies for the express purpose of setting them free and back into the general population by releasing them at weddings and events. One of the latter is a birthday party for young Amanda (Alyssa Gervasi). They hit it off, as does Emily with Amanda’s dad, Garrett (McGarry).

He cashed out of a business and has some time on his hands so he steps in to help when Emily gets the opportunity to stage a huge release for the wedding of socialite and influencer, Rebecca (Amanda Jordan). That’s going well until a parasite threatens the butterflies, Amanda’s chief competitor, Mandy (Kathryn Kohut), threatens to take the job, and Garrett’s ex, Jill (Helena-Alexis Seymour) returns, alongside an offer to return to New York.

It’s a lot to process all at once until Emily’s dad, Larry (Randy Thomas), reminds her it’s OK to take a leap rather than stay in her own cocoon. M.J. Grabiak directs a script by T. Booker James.

Previewing From: "A Rock and a Farway" + Ten Takeaways From the Series Producers

Top of the Lake Preview: Episode 3