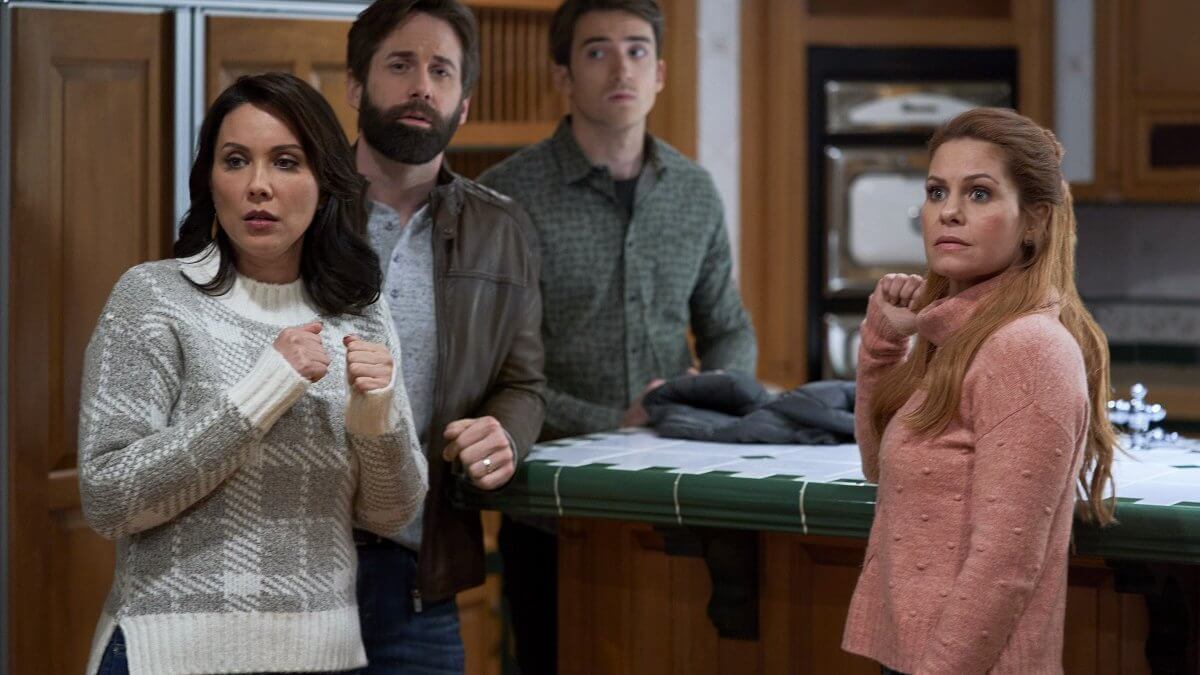 Ro, Nick, and the crew are back on Hallmark Movies and Mysteries this Sunday with the 18th installment of the Aurora Teagarden Mysteries series.

This time around, they throw in a fun behind-the-scenes trick of having the daughters of series stars Candace Cameron Bure and Lexa Doig, Nastasha Bure and Mia Shanks, appear as younger versions of Ro and Sally in flashback sequences set in their high school days. The flashbacks figure heavily into a mystery that resumes in the present.

The story begins as Aida purchases a storied old home as a house-flipping project. It’s an odd choice as it’s the site where Ro found her first dead body two decades earlier when she and Sally settled a dare/bet by going inside the house that was considered haunted then and even moreso now.

Aidia doesn’t buy into the lore until things start going bump in the night (and day). Phillip, Ro, and Nick offer to spend the night in the house with Aidia and then Sally gets roped in when her editor thinks a sleepover in a haunted house is a great idea.

Once they’re all in the house, strange things continue to happen and aside from a potentially century-old ghost there are several potential corporeal suspects, from the developer Aidia outbid to the next door neighbor who freely comes and goes from the house to the contractor who aggressively pursues the renovation.

The Real Murders Club starts parsing the evidence, and Lilian gets involved, too, when it turns out that the dead man Ro found in high school was part of Lilian’s ghosthunters club. The result is a very busy tale with a lot of moving parts and people and a fun CdnTV outing with guest stars including Virgin River‘s Lynda Boyd, Dark Matter‘s Jodelle Ferland, and Resident Alien‘s Ben Cotton. Martin Wood directs a script by Teena Booth based on her story with Jim Head.

Aurora Teagarden Mysteries: Haunted by Murder premieres Sunday at 9 pm/8c on Hallmark Movies and Mysteries after a marathon of movies airing Saturday and Sunday starting at 11 am/10c. Here’s a sneak peek of the new film.

The Strain Preview: “The Silver Angel”