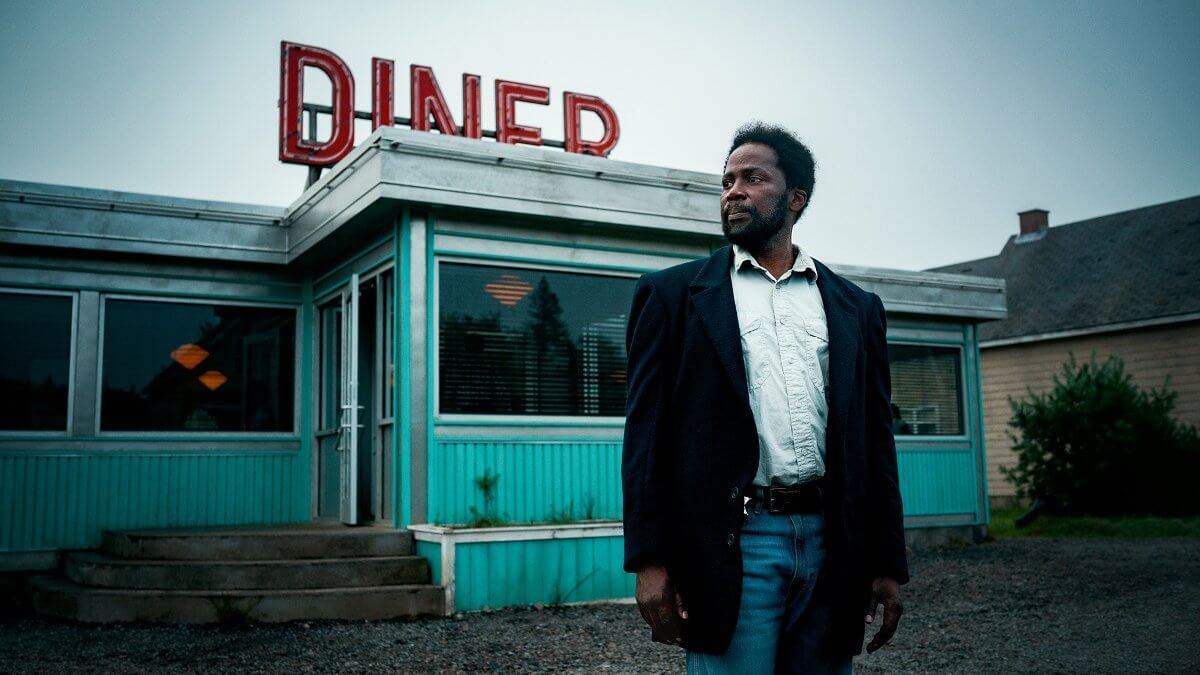 Sunday night, EPIX launches a new drama that is straight up trolling me with a boogedy, emotionally-grounded horror series filmed in Haven’s old Nova Scotia stomping grounds. We’re all familiar with the sleepy little towns that roll the streets up after dark, and in From, they have very good reason to.

After sunset, the nameless little hamlet legitimately becomes its own kind of panic room. Presumably set in the now, the town is a purgatory of sorts for travelers who arrived (the titular from) out of the blue, on their way to somewhere else, and then just couldn’t leave again.

And those would-be travelers are now a population of a hundred or so people who’ve learned to live by the code of getting home by nightfall or paying a very steep price. The who and the what that they’re all trying to avoid isn’t completely clear, but it’s otherworldly, terrifying, and predatory.

Harold Perrineau anchors the cast as Boyd Stevens, the town’s sheriff, who protects his people and keeps the peace. He’s haunted by his own loss and walks a fine line between the community that lives inside the ramshackle town limits and “The Colony” of citizens, led by Donna (Mary Kills People’s Elizabeth Saunders), who choose to live just outside town in a commune arrangement inside a rambling old estate.

The peaceable dynamic changes in short order when Boyd has to reset the “X days without incident” chalkboard and the Matthews family arrives. Dad Jim (Eion Bailey), mom Tabitha (Catalina Sandino Moreno), teenage daughter Julie (Hannah Cheramy), and young son, Ethan (Simon Webster) are ostensibly on their way to a holiday with Tabitha’s parents when they wind up driving through town.

And then they repeat the drive again and again, always returning until they run off the road in an accident with Jade (David Alpay), another traveler. Then the clock is ticking to get everyone to safety before things get dangerous. From there, we see how the new arrivals and the town affect each other.

I’ve screened the first four episodes and really, really enjoyed them. It’s a slow build as we learn a little more about each of the characters and how they wound up here. We also see how the people in town and in The Colony have adapted—or not—to living in a constant state of a heightened adrenaline response. The Matthews have no choice but to settle in, while Jade is a little harder to convince that his situation is real.

Series creator and executive producer John Griffin wrote the pilot, directed by fellow EP Jack Bender. The showrunner is Fringe and Lost’s Jeff Pinkner. I’m sure there will be obvious comparisons to Lost, but full disclosure, I never got into it although I know where it landed (pun intended). I’m sure that’ll be a draw for some, and if so, great. Whatever brings the viewers.

I personally find that a better way to tell these kinds of psychologically resonant horror stories. The unknown is what’s hanging over all of these characters, and keeping the attacks at arm’s length, visually speaking, sustains the suspense.

It’s a very good cast across the board. I’ve dug Perrineau from way, way back and he’s excellent as Boyd, especially as we see him grapple with balancing his exterior calm and his inner turmoil. And it’s fun to get Bailey in an episodic series. He imbues Jim with a grief and rage as a father and husband facing one more thing he’s (so far) powerless to change.

It’s great to have Canadians among the regular cast, too. We last saw Saunders in SurrealEstate, Moore appeared in Shudder’s Slasher: Flesh & Blood, He has recurred on The Good Doctor and A Million Little Things and is a romcom staple, Alpay is familiar from both series work and romcom TV movies, and Konrad was most recently in Van Helsing.

From airs Sundays at 9 pm/8c on EPIX and is streaming online at EPIX’s website and through EPIX on Prime Video. The first season will run ten episodes. Here’s a sneak peek.

Critics say #FROM is “creepy and a little bit disturbing.” Find out for yourself Sundays at 9/8c on @EPIXHD. #FROMonEPIX pic.twitter.com/ijiPc2YwIY