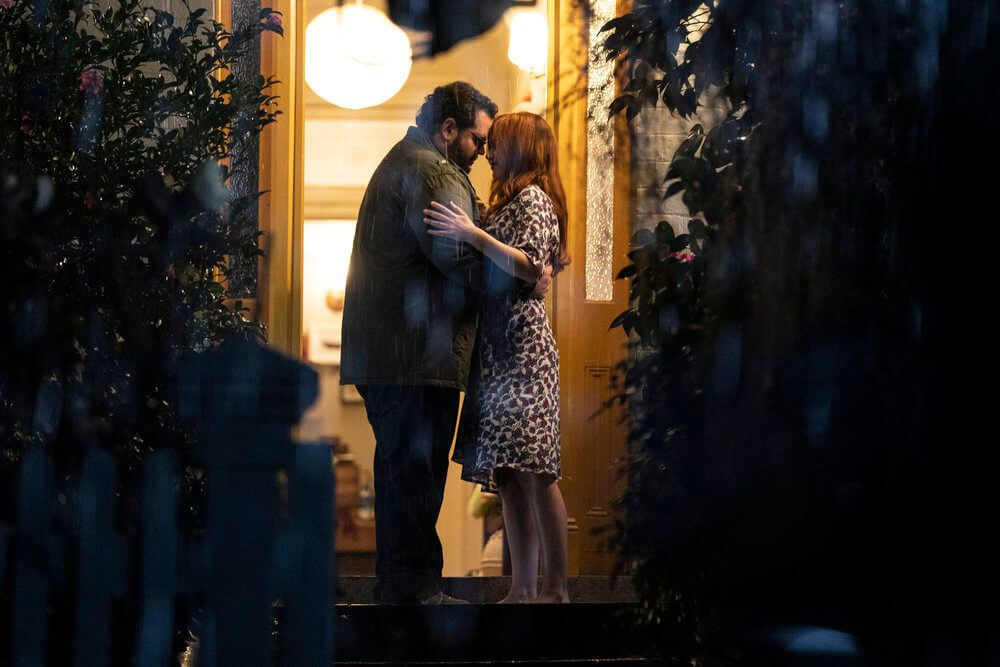 It’s no secret that relationships–familial and romantic–are hard, messy, and complicated. There are a couple of adages that have made their way into the mainstream the last couple of years talking about giving other people grace because you never know what they’re going through, and the cracks in our hearts being how the light gets in. Wolf Like Me, premiering its first season Thursday on Peacock, is a dark romantic comedy/drama that follows both of those threads in a sometimes bittersweet, sometimes angry, sometimes absurd, sometimes joyful love story.

Gary (Josh Gad) is a widowed American expat single father to Emma (Ariel Donoghue), and Mary (Isla Fisher) is an American expat advice columnist. Home for them is now Adelaide, New South Wales, Australia. All three are still reeling from individual losses and tragedies when fate, or coincidence, or happenstance throws them together during a car accident when Mary t-bones Gary and Emma at an intersection and they all amazingly emerge physically unscathed.

Emotionally, the accident tilts them off their axes. Gary and Emma have been muddling through in the seven years since they lost her mom, Lisa. Emma’s prone to panic attacks and keeps her father at a distance, which leaves him in a heightened state of worry that prevents him from moving forward. Lisa’s sister, Sarah (Emma Lung) and brother-in-law, Ray (Anthony Taufa), are his only support system.

Mary came to Adelaide following a loss, looking for a reset, and she packs a busy life of volunteer activities on top of her work to fill her days up, even if that doesn’t fill the void of truly having people who know her. It’s a lifestyle borne out of necessity as she’s forced to conceal a transformative aspect of her life (see the title) that she did not choose and cannot change or control. And it’s kept her sheltered and awkward and tentative, until Gary comes her way and she lets him see all of her.

While Gary’s tentatively dipped a toe in online dating, nobody has clicked, but when Mary manages to talk Emma through a crisis after their accident and then reaches out with an act of kindness, he finds himself connecting with her. That is until she panics and runs away.

Over the course of the season, and sometimes under the voiceover of Mary asking and answering questions with her advice columnist lens, we watch the couple navigate the should they/shouldn’t they that’s very complicated and potentially very dangerous. And that means moving across a whole wave of emotions–awkward giddiness at first contact, bewilderment at the preemptive ghosting, anger at certain hard conversations, forgiveness, joy, and yes, love.

And it opens up something in Emma, too. The trio become found family for each other, unlocking their respective fortresses (a theme that’s reflected in the recurring Queens of the Stone Age track, alongside an eclectic mix of music) and taking a collective risk to make a life together, as messy as that might be.

It’s a meandering, offbeat watch, and aside from Mary’s secret, it’s a straightforward tale–it’s not a supernatural drama. Each episode clocks in under 30 minutes so you can knock the season out in an evening. Gad and Fisher are compelling and fun, separately and together, as two people who are just trying to get through the day, until they’re presented with an opportunity, out of the blue, and decide to take a bold, uncertain, but hopeful leap and do the best they can.

Abe Forsythe (Little Monsters) writes and directs the season, and executive produces alongside Gad and Fisher. Wolf Like Me drops its entire six-episode season Thursday at 3 am ET on Peacock. Here’s a sneak peek.

Haven Preview: “The Trouble with Troubles” [VIDEO and PHOTOS]